Dungeon of the Necromancer 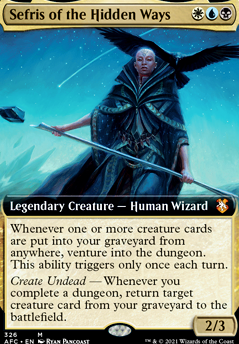 As a life long fan of D&D since back when it was AD&D, when I found out about the D&D Adventures in the Forgotten Realms set I knew I wanted to build a Dungeons & Dragons deck. That plan evolved into two decks: A dungeons deck (this one) and a dragons deck (The Hoard of the Dragon Queen).

This began as an upgraded Sefris of the Hidden Ways precon, built around gaining value through venturing into dungeons with a reanimator sub-theme. Sefris is an adventuring wizard who delves into lost tombs and dark dungeons seeking forbidden magic and arcane power. She triggers once per turn to venture whenever a creature goes into our graveyard from anywhere, then when we complete a dungeon she reanimates a creature from our graveyard, so this is deck is built to venture and put creatures into the graveyard and reanimate them, gaining additional value from our commander's triggers.

So, we're using looting effects like Frantic Search, and graveyard tutors like Entomb to put creatures in the graveyard (triggering Sefris), then using Sefris's Create Undead trigger or spells like Reanimate to pull it back out. Evoke creatures like Mulldrifter and sacrifice creatures like Plaguecrafter also do the trick. We also want to venture on other people's turns since it is a once per turn trigger for Sefris, so we need lots of instant speed looting spells like Faithful Mending and instant sacrifice creatures like Glen Elendra Archmage. Tortured Existence is an MVP.

Additionally, we're including some of the best venturing cards we have available, like Barrowin of Clan Undurr and Midnight Pathlighter to push through the dungeons fasters. Radiant Solar is great for this since it can allow us to venture twice between discarding it and triggering Sefris. The main Dungeon we use is the Lost Mine of Phandelver. It give us good, incremental value every time we venture, while giving us a quick route (just 4 ventures) to the Create Undead payoff from Sefris. And its the name of the module from the D&D 5e Starter Set, which is an amazing module, so that's fun. We're typically avoiding the other two because the Dungeon of the Mad Mage takes too long to get through and the Tomb of Annihilation closes off one of our win cons.

Only I am beyond death's reach!

There are three infinite combos: The first is with Acererak the Archlich + Rooftop Storm , which will allow us to venture through the Lost Mine of Phandelver dungeon over and over draining all of our opponents out; the second is by looping Blood Artist + Ebondeath, Dracolich + Rooftop Storm or Zulaport Cutthroat, using Viscera Seer or Carrion Feeder as a sac outlet to drain everyone. Third, we can loop Gray Merchant of Asphodel + Karmic Guide + Reveillark , using Viscera Seer or Carrion Feeder as a sac outlet, draining everyone. And individually all of these cards are great in the deck. Since we've got Acererak and Rooftop Storm in the deck anyway, and Sefris is a necromancer from Thay, I've leaned into Zombies a little bit, especially the ones that synergize with the general strategy.

Check out all of my EDH decks and give a +1:

Anything You Can play I can Play Better