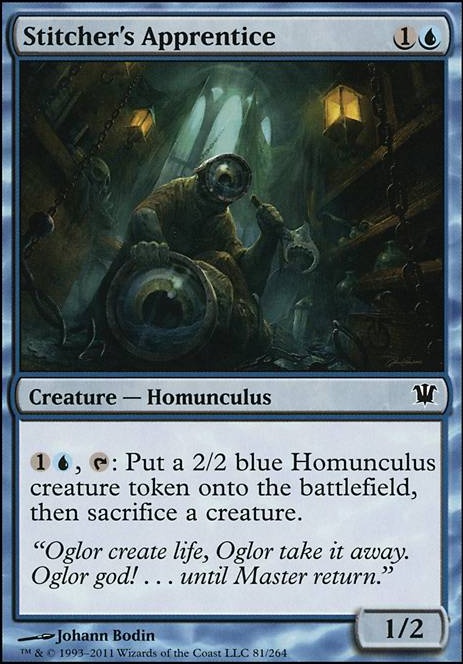 "Watch it Oglor, you're spilling my chemicals everywhere!"

Welcome to Chemical Burn, or 'The Great Izzet Science Experiment.' This deck is a combination of an aristocrat deck and a burn control deck. The card that slaps all of these cards together in my opinion is Stitcher's Apprentice . It's a flavorful little Homunculus (just look at that flavor text) that does everything we want it to do. Except protect himself, which is kind of annoying but I'll forgive him. The entire deck including sideboard is under $10, so what is there to lose? Let's get into the cards, shall we?

Stitcher's Apprentice - the ultimate value and flavor center for this deck. Makes an amazing target for removal, however. But if we can stick one, we can consistently pump out 2/2s for value.

Dragon Egg - a nice sacrifice creature for any of our many outlets. Can also just block something for value. Our baby dragon can hatch whenever we see fit, and can finish off games when necessary.

Goblin Arsonist - a little annoying thing that can be sacrifice fodder early on and can clear a few early threats from the opponent. It can also block */2s.

Bogardan Dragonheart - an easy sacrifice outlet and a quick burst of evasive damage when we need it.

Perilous Myr - most often removal for threats or a burn spell to our opponent's face.

Perilous Research - an excellent way to refill our hand and gain value from our creatures that want to die.

Reckless Abandon - one of our only forms of removal, it is also a nice way to remove a large chunk of our opponent's health. Replace with Collateral Damage if instant speed is worth the -1 damage to you.

Wrangle - another odd form of removal that we run in order to take out small threats and use them against our opponent (then sacrifice them to our stuff).

Otherworldly Outburst - another way to take advantage of our dying creatures by creating another aggressive token body.

4 Swiftwater Cliffs - because you just gotta

Ingot Chewer - artifact removal with a body. You can sacrifice it when its ETB trigger is on the stack.

Electrickery - for elves, tokens, or weenies

If you like the deck, give it a try and let me know how it goes! All suggestions are welcome, but remember, only common rarity is allowed in Pauper.

If you liked this pauper brew, check out this other one I made!