This deck is all about piracy. I want to copy and/or steal all my opponents cards! I'm not planning this deck to be strong or to win everytime, I just wanna wear my pirate hat and play with other people cards. If I win, it is their fault! xD

Upvote for our Admiral's sea supremacy! 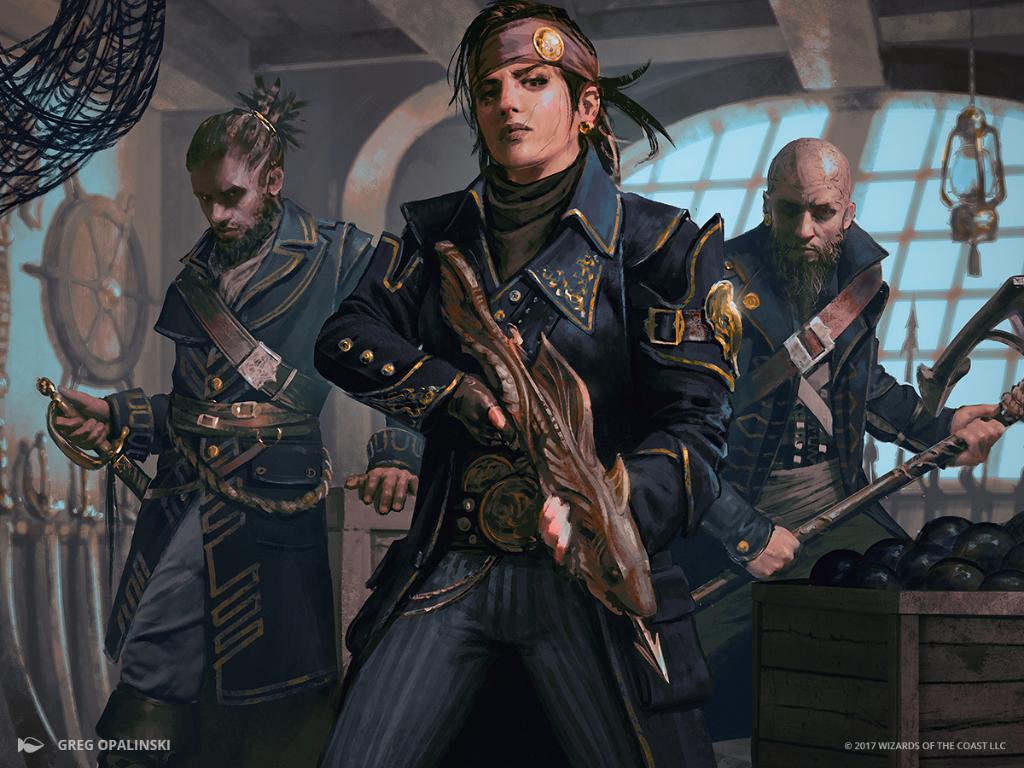 "You and your ship will make a fine addition to my fleet."

This deck started on July 2017, with the idea of creating a cruel-control Grixis steal-your-stuff deck based on Nicol Bolas and his evil-doing vacation on Amonkhet. The thought behind the idea was:

can copy, redirect or steal spells and permanents.

can also copy and redirect spells, and can steal creatures until the end of turn.

can revive creatures, stealing them from their owner's graveyards.

Soon after I had this idea, we got the Ixalan leaks, and among them was Admiral Beckett Brass. She (I didn't knew at the time the card was a she, because of the leak quality, it got me by surprise haha) was a perfect fit!

I was a bit early to plan a deck with her, but I did it anyway. DO WHAT YOU WANT 'CAUSE A PIRATE IS FREE, WE ARE PIRATES! It was kinda hard 'cause there wasn't many pirate cards, but I played a lot of steal spells and Conspiracy to create my own crew. (The only non-released card I was playing with my friends was the commander herself.)

Now, mid-September 2017, the Ixalan set was finally revealed in its entirety, and I could finally plan the decklist! It's still a little cruel-control/mean deck, but in a funnier way, I guess.

If you liked it, check out my other commanders:

Decklist updated now that I got my new pirates from the set. :D

This deck is a huge success for me, so fun to play! Just wish I had room for 200 cards, there are so many fun options left out or removed from the deck...

Stealing shit on the high seas