Mortal, you are worthy...
to see Multiverse's first Dragon
Below lies the secret to unleashing it's true power and ruling over dragonkind

"We speak the dragonsâ language of flame and rage. They speak our language of fury and honor.
Together we shall weave a tale of destruction without equal." ~Dragonspeaker Shaman
"Itâs a dragon-infested lavascape of notorious peril. Make yourselves at home." ~Approach My Molten Realm

Introduction: Whom is The Ur-Dragon? 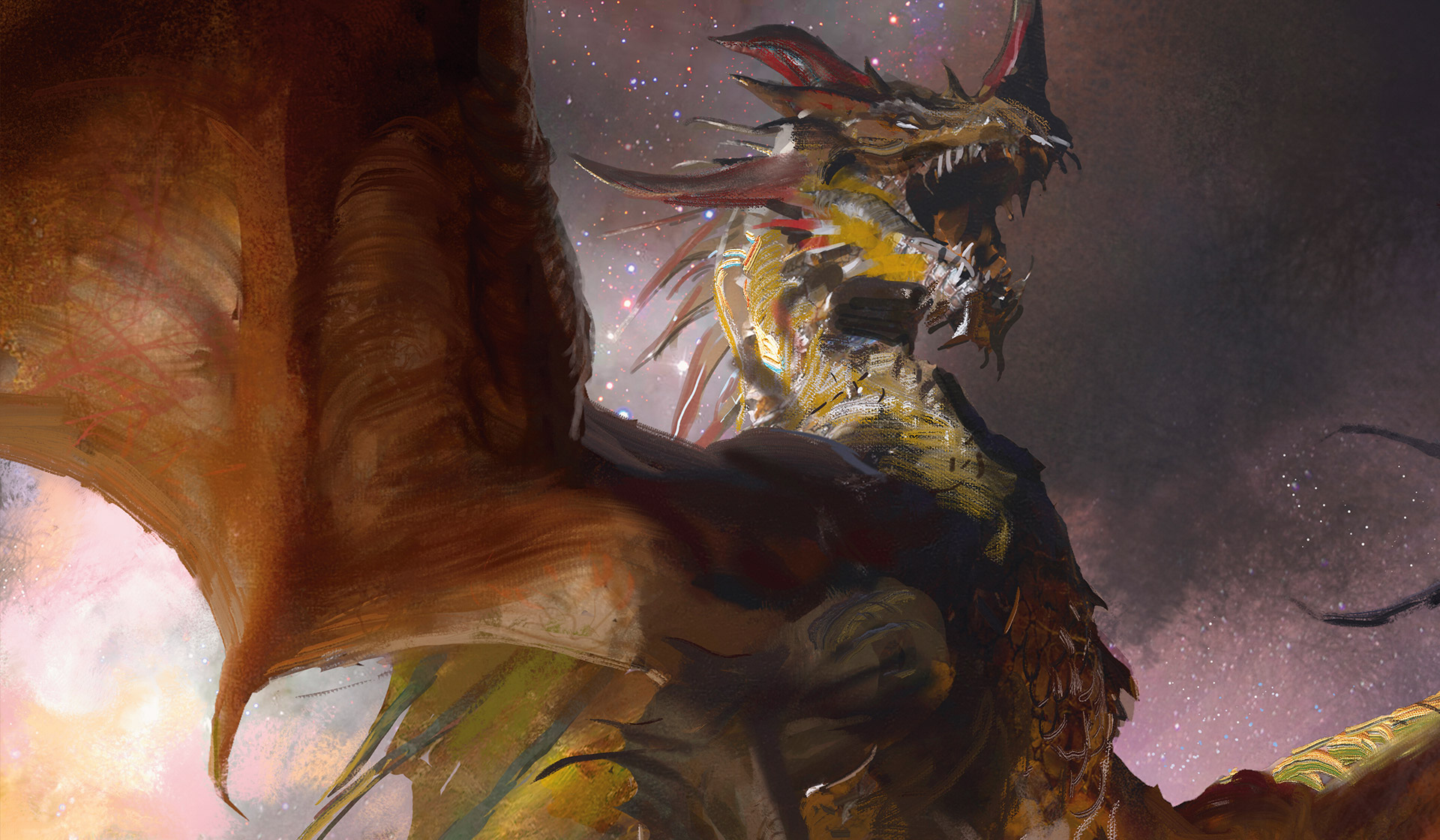 "The Ur-Dragon, Progenitor of Fire, is an enormous and immensely powerful Dragon Avatar. An entity from the dawn of time, it is the primordial essence of all Dragonkind in the Multiverse. With its wings, that extend across the eternities, it stirs the fabric of the cosmos. Its breath bellows over the mortals, stealing the essence of life. With claws that rake the aether, it sunders ancient bonds. Thanks to its eyes, the Ur-Dragon perceives the deepest truths concelead in the wells of time. Its bellowing roar summons its brood, echoing through the blood of all dragonkind, for the Ur-Dragon is the progenitor from which the dragons of the Multiverse spawned"

This powerful Dragon Avatar requiring to summon rarely comes to the battlefield but when it does it lays waste to opponents and does that all by itself. Even the slightest increase in power allows for 2-hit kill with commander damage and every attack of it and its' Dragon brood provides card draw and cheating permanents into play (most of the time more Dragons).

However, there's no need to play the commander, because even it's very essence provides massive help from the Command Zone due to Eminence ability. Now with its' ability every Dragon costs less to cast, which means that every single one of them can be virtually played one turn earlier than it normally could. This can easily turn the tides in your favour as there are many Dragons with powerful and synergistic abilities. Besides that there are also means to reanimate or cheat into play Dragons to win through traditional combat damage or with Scourge of Valkas/Terror of the Peaks/Dragon Tempest burning "enters the battlefield" triggers.

Chapter I: Land of Dragons "It is a world as cruel as those who call it home. There's only one rule here: the strong survive. ~Savage Lands

The sky is the dragonâs throne, the seat from which it issues its fiery decrees." ~Jund Panorama


This 5-color deck, with it's primary source of power just like in most Dragons being mana, and being secondary and providing massive support in mana, card advantage and removal, while and are tetriary, stabilizing powers mostly for additional card velocity.

"The dragon is a perfect marriage of power and the will to use it. ~Crucible of Fire"
"Has no pretense of compassion, no false mask of civilization â just hunger, heat, and need. ~Hellkite Overlord"
"Dragons scorn the weak, even among their own kind. ~Hunt the Weak"

Main focus of the deck is to win through damage - be it combat or not. Dragons chosen as "worthy" including here aside from being huge Flying creatures also have abilities that help advance that gameplan and/or protect it or disrupt plans of others.

"The raging green dragon left destruction â and at least one admirer â in its wake." ~Ambitious Dragonborn
"The behemoths are content to graze like cattle, while dragons rage and conquer.
I know which example Iâll follow. ~Godtracker of Jund"

Other creatures besides Dragons are used as a ramp to cast everything earlier. Every one of them requires making it the most important color during first few turns.

"If you fear the dragonâs fire, you are unworthy to wield it." Ghostfire Blade

"The spell fell upon the crowd like a dragon, ancient and full of death." Fireball

Instead of usual 'SLightly played' here I marked this way cards that I don't have IRL yet. But I will acquire them someday and for now I'm using some replacement - let me know if these are good enough!

Credit for this amazing CSS style goes to scotchtapedsleeves

And last but not least - huge thanks to my fellow Dragon Master NeonEndymion, who provides constant support and ideas to brainstorm together, check out his work here: Dragons Awake!

Small changes with tons of cards added to Maybeboard to keep in mind while playtesting.

Flight of the Dragons