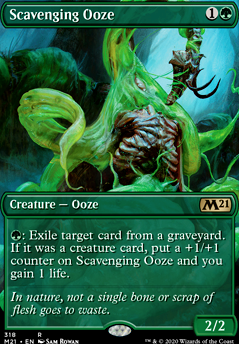 This deck is a prototype for an atraxa deck that is versatile and flexible.

Atraxa should protected fast and easy. For this I use Aspect of Mongoose and Alpha Authority .

Aspect comes back to my hand if there is a board wipe or a sacrifice effect.

Alpha is there for redundancy.

These are why I choose to play Winds of Rath .

The enchantments in this deck are very important. Protection for Atraxa, proliferating more with Inexorable Tide , playing anything with Omniscience , stopping your opponents graveyard shenanigans with Ground Seal , abusing the superfriends with oath of tefiri, or stopping another atraxa player with Eidolon of Obstruction .

There are a few key cards to look at here.

Next I have to talk about Vampire Hexmage and Suncleanser . These two remove counters. Sounds weird at first but is very useful against a planeswalker or a creature with a lot of +1 counters. Then you add in Lost Auramancers to immediately remove all time counters forcing a sacrifice and searching for an enchantment. This combo is perfect in the opening hand. I'm pretty much running Serum Powder just to increase the odds of starting with these.

This is currently a work in progress.

This deck is not meant to be competitive.

Edit: Removed Kasmina, Enigmatic Mentor for Karn, the Great Creator To improve on my stax plays and annoy my friends.