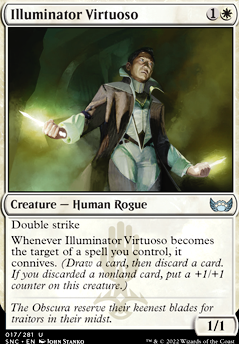 Welcome to the deck! The goal of the deck is to absolutely murder your opponent in 1 or 2 terms using strong heroic creatures, namely Fabled Hero or the brand new Illuminator Virtuoso from Streets of New Capenna. The idea behind this deck came when I was playing an azorius standard version of this deck when I realized, "huh. What if I used Wild Shape to increase Virtuoso's base power and hit a connive trigger?" and thus, Standard Bant Tempo was born... except it did really bad because I ended up cutting too much to splash green... and then I learned of Scale Up's existence. I immediately got to work constructing this deck, and behold the final product(hopefully). Brewing this deck in modern allowed access to more options that would fit the deck better compared to what it was in standard, thus working out.

Despite having a very narrow goal, the amount of ways this deck can achieve that goal is what makes it so flexible. It's also super aggro to the point its possible to kill turn 3 without ever casting a ramp spell or mana dork. The center of this deck is Illuminator Virtuoso. The Connive trigger is super strong on a double striker, as it grows the double striker, AND filters cards. As a backup plan for when you don't draw Virtuoso, there's Fabled Hero. Essentially the same thing, just no card filter. You generally don't want to have multiple in play as it would be better to just pump one of them and give it bypass(more on that later). Stormchaser Drake is also a good pseudo-heroic creature and acts as an insane draw engine, allowing you to draw into Virtuoso/Hero while also building itself up as a minor threat. Lastly, Mavinda, Students' Advocate acts as the Feather on Steroids for this deck(I'm a bit hesitant to splash red due to my lack of funds for shock lands), giving all your spells Flashback for free until end of turn, allowing this extremely early game aggro deck to still have a devestating presence in the late game. As for Dryad Arbor... I think it's a power move to play Fortified Village and Reveal Dryad Arbor from your hand, so the 1 copy stays, fuck you.

This deck is filled with Pump & Evasion Spells, as these target our Heroic creatures and grow them even bigger, getting the job done quick. The golden pump card is Scale Up, because for 1 mana, you're creating a 7/5 double striker(menacing.gif). Using Scale Up Alongside other Pump Spells, namely Mutagenic Growth or Distortion Strike will devastate opponents. Vastwood Fortification Â  is also included as another, weaker option but also helps with the land base due to it being MDFC. As for Evasion, Distortion Strike acts as both pump and evasion by giving your big Virtuoso/Hero Human Wurm thing(?) unblockable, to the point where you might as well redub the creature type to Horror. Emerge Unscathed doubles as protection and evasion by giving it protection from the color of any current blockers, thus adding more versatility. Also good for if you can't get the kill in 1 turn cycle, because you can easily clean up the next turn cycle with the Rebound effect. However, by far, the most unfair Evasion in this deck is Security Bypass. Given that your Virtuoso/Hero Human Wurm Distorted Horror thing(??) doesn't have summoning sickness, you net a permanent +3/+3(one from being targeted by Bypass, one from precombat strike, one from main combat strike), growing big fast in situations where you may need another turn cycle to wipe your opponent out or even in multiplayer games! In the end though, turn 2 virtuoso into turn 3 Mutagenic Growth + Scale Up + Security Bypass , Distortion Strike + Mutagenic Growth + Scale Up , Emerge Unscathed + Scale Up + Vastwood Fortification , or my favorite, Mutagenic Growth + Mutagenic Growth + Mutagenic Growth will (most likely) kill your opponents turn 3.

This deck can easily kill turn 3, but that assumes your opponent won't Fatal Push or Counter Virtuoso the moment it hits the board, so its better to play Virtuoso Turn 3 and hold 1 mana up for a protection spell, especially true in best of 3 after sideboarding happens. The 3 choices of protection spells, Slip Out the Back, Emerge Unscathed, and Snakeskin Veil also Net virtuoso/hero permanent +2/+2, while also costing 1 mana is vital. The Slips are especially good because you can also Force your opponents Blockers to phase out as well since the deck doesn't run any other removal spell and in case you don't have the Evasion Spells in hand.

I'll be honest: I have no clue how to make a good sideboard. Please give feedback and suggestions. Thank you.

Overall, Brokers Charm for enchantment hate and a way to target your heroic spell and remove a blocker. Consuming Tide for decks that drag the game out late so you can deal a finishing blow(Your heroic creature is probably your ONLY nonland permanent). Turn Aside to play against control players acting against our board.... Until they start using Void Rend :skull:. Valorous Stance for stompy aggro decks and protection as well. Witness Protection because its funny and it shuts down problematic creatures opponents may get down early(Monastery Swiftspear moment).

due to the aggressive nature of the deck, I felt ramp/mana dorks/mana rocks were unnecessary for the deck, so our only mana source is lands! I didn't go very high end with the lands because, as mentioned earlier, shock lands cost more than half the entire deck.... so.... no. Maybe when I'm richer(read: not building more edh decks) I'll consider going with Shock Lands.