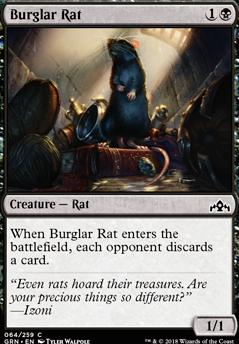 This is a discard deck I created for MtG Arena. It uses cheap drops with discard effects to burn out your opponent early in the game.

Gutterbones and Sanitarium Skeleton are good first turn drops to block any creature your opponent may try to summon. They both have the ability to return from the graveyard to your hand. Gutterbones restricts only to your turn and only if you dealt damage to your opponent, but that's ok.

Burglar Rat and Fell Specter (with the bonus of dealing damage also) are your creatures with discard effects. The Burglar Rats can be easily traded while blocking any creature your opponent may summon, but avoid losing the Fell Specters, since they deal damage when your opponent discards a card.

After much play with a discard deck, I found out that good battlefield removal effects are still needed. Sometimes your opponent may be able to get in play a serious creature/Planeswalker and you must deal with that. That's when Ravenous Chupacabra and Plaguecrafter comes into play. The Ravenous Chupacabra will remove ANY creature while entering the battlefield and the Plaguecrafter forces the opponent to sacrifice a creature or even a Planeswalker! The Plaguecrafter's effect is valid for you too, but always remember that you can sacrifice the Gutterbones or the Reassembling Skeletons (the ones you can recover from the graveyard) or even the Plaguecrafter himself (instead of having to discard any card or sacrificing a Planeswalker)! Nothing will survive the battlefield with them!

Almost every other enchantment/instant/sorcery are discard effects. Murder will help you removing from battlefield any other creature your opponent may summon. Sovereign's Bite is a good burn/heal sorcery. Thought Distortion will exile every non-land, non-creature card from your opponents hand and graveyard.

Both the planeswalkers, Davriel, Rogue Shadowmage and Liliana, the Necromancer

are for burning your opponent. Liliana will help you grabbing from the graveyards anything you find interesting. With your opponent totally handicapped, it won't be difficult to slowly burn his life points and win the game!