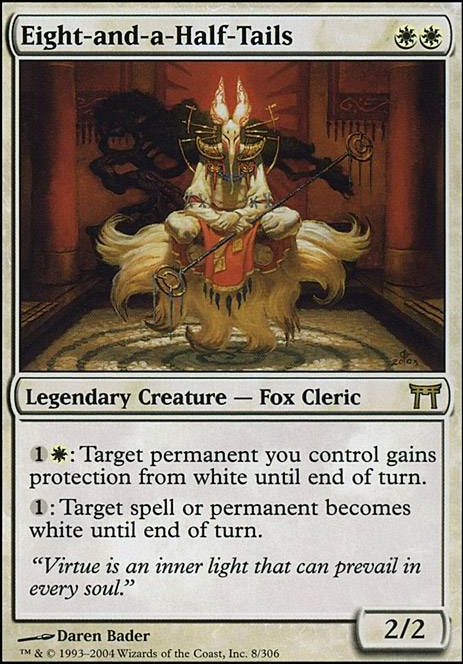 " Virtue is an inner light that can prevail in every soul. "

Eight-and-a-Half-Tails has been one of my favorite pet cards for a long time and this deck has seen many changes throughout the years. I finally built a version that i like despite the obvious flaws of mono white. But that's part of the challenge and the fun ! It's a weird mix of voltron, pillow fort and control. The token-flooding cards serve as alternative finishers : they take advantage of the surprising amount of mana that this deck is capable of producing.

A little bit of Lore, courtesy of MTG Wiki : Eight-and-a-Half-Tails (Japanese: å«ã ã å°¾ãåã¯ã; rÅmaji: Yatsu-O-Han) was the highest spiritual leader of the kitsune in the plane of Kamigawa. An extremely skilled cleric and healer, his nine tails were a product of a long journey marked by several spiritual, practical, and emotional achievements, each of which brought him a new tail. He was an unusual kitsune since his birth - instead of being born with a pure white-tail, he had a black streak in it. This was seen as an omen of great destiny, of changing the world.

Eight-and-a-Half-Tails was arguably the most experienced mortal on the whole of Kamigawa when it came to the spiritual world. Upon the request of daimyo Konda, he did extensive research on the kakuriyo. Before handing the results to Konda, he realized that the rituals that Konda asked for could be used to breach the barrier between the mortal and spirit world. A shadow went through his mind, but he banished it and assured himself that Konda was no madman who would attempt to meddle with such things and abuse them. By doing this, he became indirectly responsible for Konda's crime and the Kami War - and also for the death of one of his best students, a priest named Iron-Claw, who decided to leave the clergy when the war erupted to join the fight. Iron-Claw would later perish in a battle with the kami.

When the kitsune elder Nine Tails realized all these things, he decided that he had no right to wear his nine tails as a sign of honor. As penance for his crime, he cut off half of one of his tails with a ceremonial knife. Since that day, Nine-Tails was no more, and Eight-and-a-Half-Tails was born.

1x Desert of the True

1x Order of the Sacred Torch

1x Shell of the Last Kappa

1x Sword of Light and Shadow

1x Sword of War and Peace