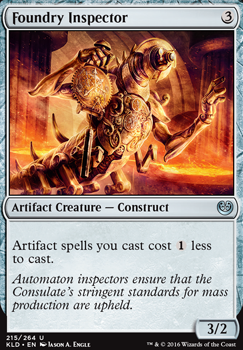 Welcome to the Recycling Plant! Create huge board presences as early as turn 3, and mill out your opponents with an infinite combo! A very reliable deck, with many different avenues and tactics for closing out the game. Is fairly graveyard-centric, but nicely dodges a lot of graveyard hate, as Metalwork Colossus uses an ability to return to your hand, rather than being cast.

The absolute best-case (though unlikely) scenario is a win on turn 4, as follows:

From this point you can infinitely mill your opponent, by activating the ability of the Metalwork Colossus in your graveyard, sacrificing the Food created by the Gingerbread Cabin and the other Metalwork Colossus (Which causes Ulvenwald Mysteries to create a Clue) to return it to your hand. You can then cast it for free, as it's discounted by the artefacts on the board. You can then infinitely sacrifice the Clues made by Ulvenwald Mysteries and your Metalwork Colossus to mill them with Altar of the Brood and create infinite amounts of 1/1 Soldiers, and draw infinite cards.

The deck tends to win around turn 6, and has insurmountable board presences by turn 4 often. Below are descriptions of each piece of the deck.

Altar of the Brood: Is the milling puzzlepiece. Only a couple of them, as they're most reliably useful later in the game, and can be recovered in a few different ways from the graveyard if milled.

Bonders' Enclave: Will be able to draw cards pretty reliably with most creatures in the deck.

Castle Garenbrig: Boosts the deckâs mana a bit, which can be especially important in a deck with larger creatures.

Commune with the Gods: Allows the retrieval of Ulvenwald Mysteries occasionally.

Den Protector: Is an interesting piece - returns a card to your hand for 5, and triggers The Great Henge ability. Replaces Reclaim as it had too low a ceiling. This can even be recurred with Grapple with the Past and such.

Geier Reach Sanitarium: Allows the discarding of the Metalwork Colossus to start the combo.

Goreclaw, Terror of Qal Sisma: Is being trialled as a one-of. Discounts your Metalwork Colossus to free if you have The Great Henge out, and allows them to stomp through with trample against large boards.

Grapple with the Past: Can fetch you back important and useful pieces from the graveyard, and assists in milling the right cards.

Llanowar Elves: Does what it says on the tin. Is a nice 1-mana draw spell with The Great Henge later in the game.

Metalwork Colossus: Is your secondary key piece, of which you can have two of as early as turn 3. Has a lot of flexibility and interesting plays. For example, you can activate its graveyard ability when Tireless Tracker is in combat to suddenly pump it by two, surprising your opponent especially if you're tapped out.

Perpetual Timepiece: Is a useful one-of; fetch out of the deck with Reclaim to recycling your graveyard if you're milling yourself too much.

Reclaim: Gets you back useful bits and pieces - swap out for Nature's Spiral in aggro matchups.

Sanctum of Ugin: Is a nice one-of, allowing you to fetch out a second Metalwork Colossus when you cast your first.

Sequestered Stash: Allows the return of your important artefacts, and allows some extra mill when desperate.

Tamiyo's Journal: Discounts the Metalwork Colossus if need be, and makes some extra use out of spare Clues, getting you more important pieces.

The Great Henge: The key piece and namesake of the deck (It's a plant that enables recycling, get it?). Discounts the Metalwork Colossus by nine, and creates the two extra mana required to play it; comes down quite frequently on turn 3, and really boosts the board state - a difficult threat to deal with.

Tireless Tracker: Is a fantastic way of getting you some card draw and big bodies, plus gets infinitely large with the infinite combo in the deck. Since Wayward Swordtooth triggers it so often, too, it can really go off the rails.

Ulvenwald Mysteries: Is the infinite combo card, and can help you stall out the game if you have a Clue generator with the Soldiers it creates.

Vessel of Nascency: Will sometimes net you that all-important artifact or enchantment draw.

Wayward Swordtooth: Is a lovely blocker and attacker when activated, and allows The Great Henge to come down on turn 3. Triggers Tireless Tracker often.

Graf Mole: Is good for longer games where lifegain is important.

Life's Legacy: Can be a useful piece for those games which are expected to draw out; both puts a Metalwork Colossus in your graveyard, and draws tons of cards.

Nature's Spiral: Gets you back cards immediately for when you need them. Good for going against removal-heavy or aggro decks that wipe out your creatures.

Return to Nature: Has some useful flexibility and graveyard hate.

Briarbridge Patrol : Would give an alternate route to cheating out a Metalwork Colossus fairly easily, and isn't a bad body; turns the deck more controll-y, but not bad at all.

Westvale Abbey Â : Gives an alternate use to elves and Human tokens later in the game, also allowing cheating out The Great Henge with the flip. Hard to commit to it though, as already so few forests, which are very much needed in a mono-green ramp deck.

Devoting to Being Green