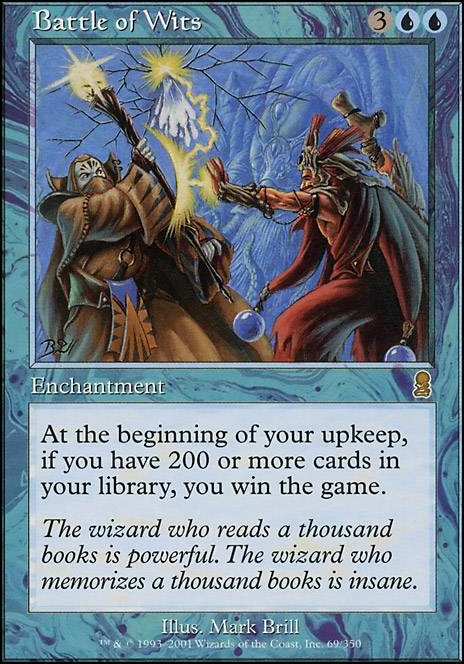 The battle of wits has begun. It ends when you decide and we both drink, and find out who is right and who is dead. - The Man in Black

I've always been a fan of alternate win conditions, and Battle of Wits was the first I ever tried to build a deck around. Granted, that was back in 2001 when Odyssey came out, and my childish "deck" was merely every card I owned thrown into a big stack, hoping I would pull the one copy of Battle of Wits I owned. It worked... once. Now some sixteen years have passed, and I have decided to recapture that childhood joy, and build a modern-legal Battle of Wits Deck.

Recently, I have made a fairly significant change to this deck--the removal of all tutors, including fetch lands. While this makes the deck perform a bit worse, it also mitigates problems you might run into with slow play rules--it is, after all, rather difficult to shuffle 240 cards at once, and the original iteration of the deck required a fairly significant bout of shuffling to function.

Instead, the deck now runs a few more ramp creatures to ensure colour fixing, as well as has a heavier emphasis on green lands to ensure you can pay your mana dorks early.

While Battle of Wits is the preferred way to win, the deck has a subtheme of infinite persist combos. While these combos are not necessarily the best in the game, they have the advantage of having numerous redundant cards, making them fairly easy to pull off without significant card draw or tutoring.