Rise of the Lich Queen

I am resurrecting my old zombie deck for Varina, Lich Queen. 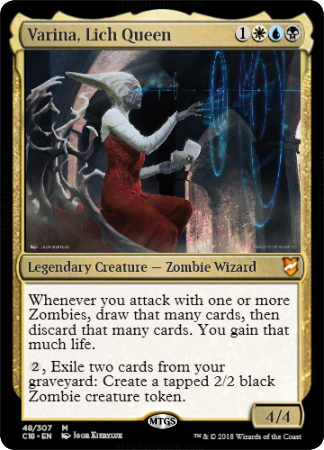 Yes, I know that Grimgrin, Corpse-Born is incredibly powerful, considering he is his own sac outlet that has amazing synergy with everything zombies like to do, and The Scarab God has pure, raw power. But I am intrigued with what Esper zombies brings to the mix by adding white. So let's delve in!

What does the Lich Queen offer herself? Well, for starters, she is a 4/4 body for 4 - - that's not too shabby! She's a zombie and a wizard; one of those we care about, the other is pretty irrelevant (here, anyways). And she makes her own zombies too! For the low, low price of and exiling two cards from your graveyard, she can summon forth an undead warrior for you zombie-ing pleasure. But wait, there's more! Whenever you attack with one or more zombies, you get to loot your deck for each member of your shambling horde that you turn sideways, and you gain that much life too!

Wow! Talk about incentivizing zombies to do what zombies already like to do anyways! You want to swing? Swing away! This is a card game, so we love to draw cards! But these are zombies, so we also like to fill up our graveyard too! And, hey, who doesn't like more life? So how do we work to make the most out of all of this fun stuff?

Supporting Cast: (all the non-zombies)

Endless Legions of the Dead


They Keep Getting Back Up!

White adds some good stuff to the removal package (not like black is lacking there...)

Plus a pretty standard counter package:

If it's not in another panel, then this is why it's in the deck.

Some cards I've previously considered, but decided against or removed. WOuld consider again, if there's a strong enough argument (unless it was excluded as a consideration for my meta).

So what are we trying to do here, anyways? Well, at heart we've got your standard tribal zombie horde type of deck. But now we've got a commander that really rewards you for being aggressive by giving you lots of card draw and plenty of lifegain. We've got all the anthem sticks to make zombies big (well, most of them). Mirror Entity can make them even bigger. Lord of the Accursed means your opponents have to block each of your zombies with at least two creatures, while Death Baron ensures that you'll be killing at least two creatures with even the lowly 2/2 zombie tokens. Make sure Varina is in play, swing with a bunch of zombie, and reap the rewards!

Speaking of our commander, Varina really is a beast. She can easily hit the table on turn four with three zombies in play, allowing you to swing and net more card and more life. When it comes to Varina, take advantage of the ability to discard things that you know you can get back. Toss lands if you have Crucible of Worlds, toss zombies because they pretty much always come back, and discard From Under the Floorboards because you want to cast it for its Madness cost. But keep your power cards. We really want that Wayward Servant, Alhammarret's Archive, and especially card:Annointed Procession. Double up on the zombie tokens, as well as the card draw and lifegain, and punish your opponents for every zombie that claws its way onto the battlefield.

This deck and the description are a work in progress. I'll be working on it over the weekend, so look for updates. But I would also love any suggestions for improvement, how to make it better, what to add, and what to clip. The most helpful suggestions would be thoughts on what to add, what to take out for it, and why. And, if you like it, !

So I've had the chance to play some multiplayer games finally. I've been playing against fields including: Gaddock Teeg, Linvala, Keeper of Silence, The Gitrog Monster, Sliver Overlord, The Ur-Dragon

, Phenax, God of Deception, Kaalia of the Vast, Estrid, the Masked

, and others that I forget.

We did some with Planechase, most without. Planechase adds a lot of fun to games, but wow ... The most well-laid plans are blown away like dust in the wind.

So far, the only thing not carrying its weight in multi-player games was Aetherflux Reservoir. It won me a couple single player games but, in multi-player when I'm being picked at from all sides, it just provokes people to attack at me even more. And so...

I've been wanting to try this one out I feel like the massive amount of discard that I do will turn into a melting field of opposition. So let's see how it goes!