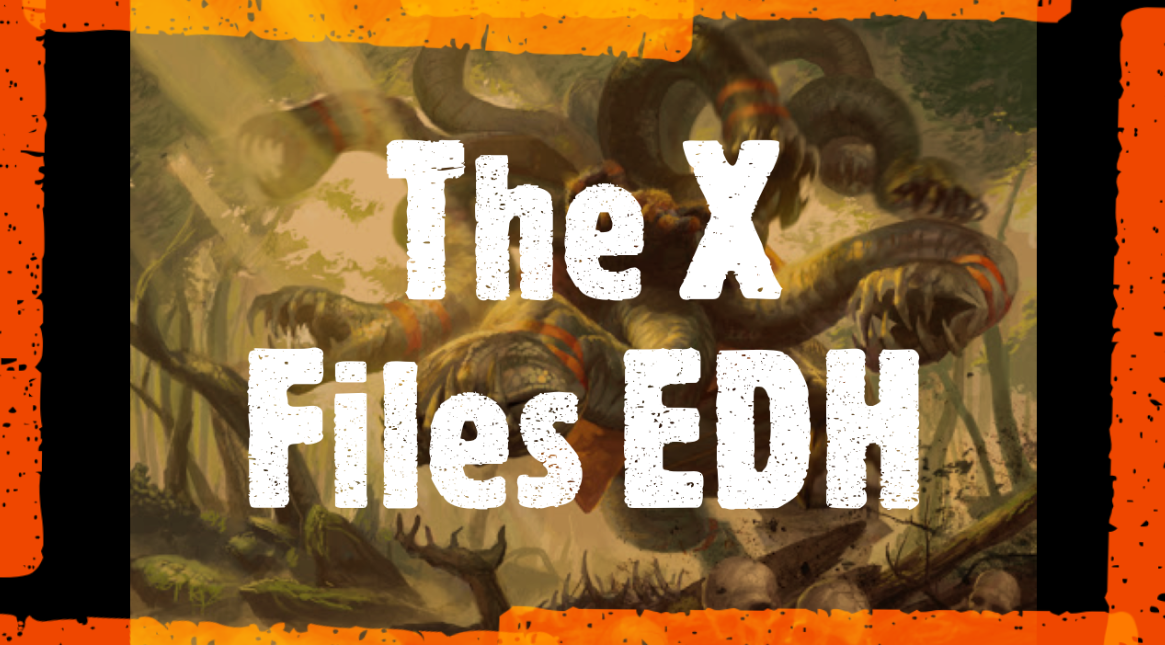 One day, Hercules went into the Hydra's lair to slay it.

He cut off its head, and two more grew in its place.

He cut off its two heads, and four more grew in their place.

He cut off its four heads, and eight more grew in their place.

Welcome to.. The X Files!

Lets begin with the decks mana base. One thing to get straight with me, is that if I have one type of land, I have ALL the types of that land. For example, if I want to include the shock land Breeding Pool, I am also going to include Watery Grave and Overgrown Tomb. I don't like to just throw in lands randomly, because its good to have a structure. That said, here are the different sets of lands I have in this deck!

As fun as the ramp is, the deck is of course based around the X Spells. Many of them are hydras, because there is a slight hydra theme (more on that later) though there are of course some of the best non-hydra X spells in the game- because why not! Cards like Torment of Hailfire and Exsanguinateare usually instant wins and are pretty crazy, though there are some other fun ones too! There are a couple card draw X spells, which are especially handy with infinite mana, like Finale of Revelation, Blue Sun's Zenith, etc! Keep in mind Braingeyser says TARGET player, so with infinite mana you can target your opponent, make them draw their whole deck and lose! That's always a fun way to win. And again with the hydras, I have cards like Protean Hydra, card:Primoridial Hydra, etc. You can find the full list of x spells above marked under "TheXFiles"! Feel free to check those out!

Besides the ramp, lands, and X Spells, there are many cards that make the deck progress much smoother than normal! Some instant adds I had to include were cards like Dark Confidant, Sylvan Library, Rhystic Study, my personal favorite: Necropotence, and many more marked under "Other". There are a couple tutors like Vampiric Tutor marked under "Tutors" (duh), and also the usual removal/disruption spells, like Mana Drain, Cyclonic Rift, Rapid Hybridization, and others, which you can find under the "Disruption" category up on the decklist. Besides all these there are some Hydra, X, +1/+1 counter, and token tribal cards to help Zaxara dominate the board. Parallel Lives works with tokens, Vorel of the Hull Clade, The Ozolith, Kalonian Hydra, Herald of Secret Streams, and of course Corpsejack Menace all help with +1/+1 counters, while Doubling Season and Primal Vigor work with both. The remaining ones like Coat of Arms are based around hydras, and can make the board go pretty crazy!

In the end I was just trying to make a fun ol Zaxara deck to mess around with, and it turned out pretty well, so here we are! If you did enjoy this deck be sure to give it an upvote, I would deeply appreciate it! Also feel free to check out my primer, Double Trouble EDH *PRIMER*, where I built an interesting take on bant voltron, now fully decked out with CSS and a very large explanation! If you need help on your deck, have some recommendations, or anything like that feel free to shout it out here or on my wall I love to help and I'd gladly help anyone who needs it- I specialize in lands! Anyways though, thanks for reading, be sure to check out some of my other decks, have a great day, and... happy tapping!