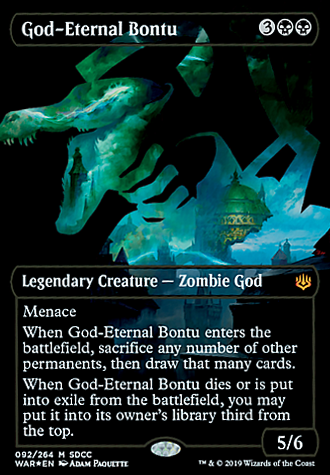 Hey yâall, This is my God-Eternal Bontu deck. Itâs the one iâve probably put through the most iterations and I love playing it. I realize that not many people play this commander, and iâve found a really fun and powerful way to play it, so iâm slowly crafting this into an actual primer. Please advise on anything that needs to be added or clarified and I will add it as I revise it.

The main goal of the deck is to set up various sac loops with God-Eternal Bontu to draw through the deck and find your win cons.

Endrek Sahr, Master Breeder + God-Eternal Bontu will continuously draw you 5+ cards, including Bontu itself if you can sacrifice it in response to itâs ETB effect.

Plumb the Forbidden can be used to sacrifice Bontu instant speed if needed, but generally itâs used as a big draw where Bontu is unavailable.

Sidisi, Undead Vizier and Disciple of Bolas work as well. Disciple will always draw you Bontu, but with Sidisi you generally want Bontu to go in the command zone or graveyard so you donât shuffle it in.

Sacrifice and Soldevi Adnate will allow you to cast Bontu again right away. Culling the Weak gets you most of the way there.

Phyrexian Altar and Ashnod's Altar are used to fuel follow up plays. You can sac Bontu to them, or tokens created by any of the token creators.

In the same vein, Nim Deathmantle and Ashnod's Altar will return Bontu repeatedly if you have a token creator out.

Genesis Chamber , Blight Mound , and Rise of the Dread Marn are the token creators that help us go off by letting us draw more cards, generate more mana via Carnival of Souls , Pitiless Plunderer , Phyrexian Altar , or Ashnod's Altar and fueling the extra sac fodder we need for various infinite combos.

There are a few ways to go infinite and win the game. Most of these need an aristocrat effect of some sort ( Blood Artist , Zulaport Cutthroat , or Ayara, First of Locthwain ).

The classic Ashnod's Altar + Nim Deathmantle and a token producer such as Abhorrent Overlord is available as well.

Solemn Simulacrum is, surprisingly, a really fun one with the Nim Deathmantle combo, pulling every basic land from the library, which can then be sacced to Bontu, or Rain of Filth to keep producing mana, as well as drawing you a huge amount of cards.

Gray Merchant of Asphodel and Mikaeus, the Unhallowed , while not infinite itself, can often win a game given how insane our board states can get.

Outside of infinite combos we use Skirge Familiar , Carnival of Souls , and Rain of Filth to fuel out spells as we search for the win. Generally we storm off and win in a turn or 2 after setting up an engine to sac and draw cards.