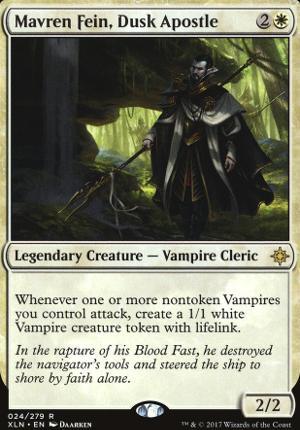 So, there is my idea for a B/W Vampire deck. I'm having trouble deciding on what Removal I want to include and sideboard, so that is why there is a lot there.

My Intention with this deck is to go for a rather Aggressive type build and mainly casual standard, for my local store's events are usually really casual. But my 1-drops. Duskborne Skymarcher Is more or less just a body to get out early and maybe a sack for Yahenni, Undying Partisan and Vicious Conquistador is really just good for a 1 drop. 1/2 and it knocks my oppoenent down a life when I attack even if they block, and a creature to sac for Yahenni, Undying Partisan late game for indestructible. But I also have Mavren Fein, Dusk Apostle because anytime I attack with my vampires, I'll get a token. Which I can just sac to give Yahenni, Undying Partisan indestructible, which doesn't specify non-token creatures. So I assume tokens are fine if it doesn't specify non-token creatures. Then Metallic Mimic and I'll be choosing vampires, and my guys will come in with +1/+1, although I was wondering if this effect stacks for each one? Would love an answer in the comments. Even if it doesn't, still makes my dudes come in bigger.

Sanctum Seeker He is there for the extra 1-life loss for when I attack, and the +1 life is nice.

Bloodcrazed Paladin 2 for a 1/1, but +1/+1 for each creature that died this turn? Could be good for my post-combat main phase if some of my guys died or if I happen to use a Dusk / Dawn, would still probably wait until my post-combat main phase to throw it down after that in the likely hood that my oppoenent happened to kill one of my attackers, maybe with a removal spell or something. They would also be 1 removal short, Even if they exile, just one less to use against that.

Then Fatal Push because with how I built my deck, I see the revolt happening way more often than not.

Unclaimed Territory and Concealed Courtyard for mana fixing, which I think should be fine for a two-colored deck.

I have Dusk / Dawn in my maybe board because I paid a lot of attention to the people at my store and what they all mainly wanted to build for their standard decks in ixalan, and A good majority of them wanted to play Dinosaurs. Most of them also usually the few regulars who show up to events. So, been thinking about putting it into my sideboard, or maybe even main board it if it most people want to play dinosaurs. Because It can help me deal with Carnage Tyrant since the dusk part doesn't target it and does it to all creatures, that and it deals with big fatties. Been thinking this through, just having trouble narrowing stuff down.