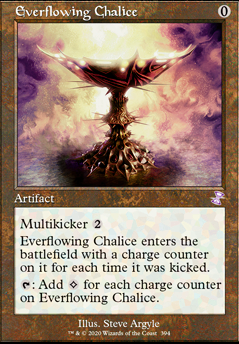 She sure does love her Cheerios!

Jhoira, Weatherlight Captain is the captain of our value engine, turning every Historic card in the deck into a cantrip. Our historic cards are almost entirely Artifacts of CMC 0 or 1, though Jhoira has brought along Saheeli, Sublime Artificer as her first mate for this voyage into Storm territory.

The primary win-cons in the deck are Firebrand Archer , Reckless Fireweaver , Psychosis Crawler , and MTG's own Deathstar Lazer Aetherflux Reservoir . Archer and Fireweaver work very similarly, pinging all of our opponents for damage when we churn out our artifacts (though Archer doesn't trigger from our cheap Artifact creatures or Saheeli's passive Servo tokens like Fireweaver does), and Psychosis Crawler pairs frighteningly well with Jhoira by draining the life out of our opponents as long as we can keep drawing gas. Aetherflux Reservoir is our "technically a storm mechanic" card that both gains us life to help keep us in the game if we whiff on our storm-out and fail to win, or just absolutely wipes out individual players quickly.

The deck includes a few cost-reducers to help make all of our 1+ CMC artifacts more efficient to play, with cards like Helm of Awakening reducing the costs of all cards, and Etherium Sculptor or Semblance Anvil reducing the costs of all our artifacts. Semblance Anvil can also potentially exile an artifact creature, which would then apply the cost reduction to any artifact or creature we play afterwards.

The deck also includes some minor artifact-based ramp, both because it can help play Jhoira earlier and because it still applies to our deck strategy when drawn into late-game. Sol Ring is a classic and staple of the format that potentially allows for a turn 2 Jhoira. Mox Amber is great with Jhoira or Saheeli out since it offers us colored mana, and is also a 0cmc for our storm count. Izzet Signet is a way to convert some of our other colorless mana sources into colored mana, and can allow for a turn 3 Jhoira if drawn in the starting hand. The deck also includes some mana-fixing artifacts with Wayfarer's Bauble , Wanderer's Twig , Traveler's Amulet , and Renegade Map . If needed, we can play them early to fetch up the lands we need to ensure a turn 4 Jhoira, and if drawn into late then they serve their purpose as artifact cantrips to keep the draws going.

Krark-Clan Ironworks is both a mana-source and a combo piece, since we can sacrifice several of our do-nothing artifacts for mana in order to keep playing cards if our engine starts to slow down. Cards like Terrarion and Chromatic Star work pretty great with the Ironworks, since they draw cards upon entering the graveyard, and can help us dig past mana-pockets and dead draws to keep looking for more gas. Scrap Trawler works quite well here, since it can help us get back some of the 0cmc artifacts for additional value, and also pairs nicely with other artifacts that can sacrifice themselves for effects like Aether Spellbomb , Pyrite Spellbomb , Chromatic Star , and Terrarion . Conjurer's Bauble is my favorite in this category, since it has minor recursion, an instant draw effect, and allows Scrap Trawler to pull back one of our other 0cmc cards. Just a ton of incidental value in a single card.

Artificer's Assistant and Riddlesmith are in the deck for card selection. Once we have Jhoira in play, we rarely ever need more lands, so being able to filter out the draws we get from Jhoira's trigger helps the deck to run more smoothly. Credit Voucher is a fantastic include here, since we can sac it later in the game when our hand is full of land to shuffle them all back into the library and draw that many cards back; it can act as a draw filter by getting rid of all the dead cards in our hand, or combo with Psychosis Crawler to drain our opponents for all of the draws from Voucher. Elixir of Immortality and Feldon's Cane are our primary protection against decking ourselves, and also pair well with the Ironworks since we can sac a bunch of our artifacts in response to the shuffle graveyard effects, and refill our deck at a moment's notice.

The only three non-permanent spells in the deck all serve the same purpose: allowing us to replay our artifacts for even more Jhoira, Archer, and Fireweaver triggers to win the game. Hurkyl's Recall and Retract are both very powerful effects, since we can hold up the mana and cast them at instant speed to protect our engine from board wipe effects in addition to casting them on our turn to allow us to replay our artifacts and keep our storm count high for the Aetherflux Reservoir. Of the three though, Paradoxical Outcome is the best by far. Since it allows us to pick and choose our targets, it lets us keep our mana-reducers in play to keep the engine running more smoothly overall. It also gives us a massive draw which pairs extremely well with Psychosis Crawler, and ensures that we can keep the value engine running with Jhoira at the helm.

For the land package, I kept it pretty straightforward and simple. Evolving Wilds and Terramorphic Expanse serve as fetches that can help thin out the deck later if we whiff early. Command Tower and Unclaimed Territory (naming "Artificers") help us a bit with fixing to ensure we can play Jhoira by turn 4 at the latest. Darksteel Citadel , Great Furnace , and Seat of the Synod can act as incidental damage by triggering the Reckless Fireweaver, and also make great sac targets for the Ironworks if we need mana to prevent whiffs later on. I mostly avoided the "good" fetch lands and shock lands due to price, though of course they would vastly improve the deck's overall play by further thinning out lands and fixing mana. I specifically avoided lands that enter tapped, however, because this deck really cannot afford to play Jhoira later than turn 4. We need her ASAP to get the storm brewing, after all!

Final note: There are some obvious upgrades this deck could use, such as the legal Moxes ( Mox Diamond , Mox Opal ), and stronger mana rocks that can pave the way for combos (like Lion's Eye Diamond or Lotus Petal ). I simply don't own them nor have the budget to afford them, since pretty much any one of these cards would double or triple the deck's current budget easily.

Beyond the non-budget includes, I would love to hear opinions and recommendations for this! So far, it has proved fairly reliable in practice play, though I'm waiting to build the deck IRL until I'm certain its tuned where I want it.

Been a hot minute since I've updated any of my decks on this site, and I realize I've made a lot of changes to Jhoira over the last couple of years since posting this originally. It was too much effort to make a complete changelog of specific swaps, since so much has changed. I simply updated the full decklist to match what I currently have in the deck IRL.

Current goals for the deck include: