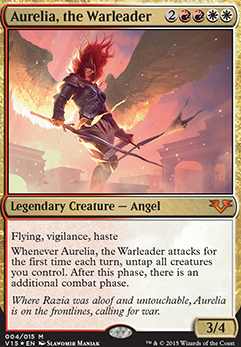 This is my Boros Angel beatdown deck based on The Angelâs Harem by Obial. This build hits hard while focusing on life-gain and Resplendent Angelâs token generating ability. I have chosen Boros over Mono-White for access to Lightning Helix and the awesome Aurelia, the Warleader.

I designed this deck for my wife, who is new to Magic and loves the angel theme. Most of the creatures in this build have flying, vigilance, and/or lifelink, or contribute to life-gain in some way. It gains life very fast and hits very hard by turns 4-7. It can surprisingly crush my competitive Mono-Black Kamikaze Rack, Esper and Sultai zombie aggro, and Orzhov cruel control midrange decks. It has also fared very well against Mono-Blue control and Green ramp aggro.

Segovian Angel is an amazing one-drop Angel with vigilance and her flavor text is possibly my favorite in all of MtG. She is critical for gaining momentum during the early game and triggering Bishop of Wings and Scroll of Avacyn. Plus she can grow into a giant monster next to Archangel of Thune.

Scroll of Avacyn is a great way to draw cards and gain life to trigger Resplendent Angel.

Path to Exile is a critical removal spell in a meta of nasty indestructible creatures and reanimation.

Bishop of Wings has amazing value for 2 mana. Not only can it generate 4 life each time you play an Angel or create an Angel token, it also provides a cushion of Spirit tokens in case of board wipes.

Knight of the White Orchid can search for a Plains including Sacred Foundry, allowing you to ramp up into the bigger angels, and thereby reducing the number of lands needed in the deck. The Knights synergize nicely with the additional land provided to the opponent with Path to Exile.

Serra Avenger is included in the deck to trigger Bishop of Wings and provide back-up during the mid to late game.

Lightning Helix can function as either creature removal or direct burn, and the life-gain helps trigger Resplendent Angel.

Boros Charm is versatile and useful in a variety of situations. It burns the opponent, gives your biggest angel doublestrike, or makes your army indestructible during a critical moment.

I have also considered Dragon Tempest, which is the most cost effective way of bestowing your angelic army and Spirit tokens with haste. However, multiple copies of it are useless and clog up your hand, so I have chosen to remove it, although that may change. I have also considered running Generator Servant, but its ramping ability requires you to sacrifice it, which is one less body to defend with, and it is subject to creature removal.

Resplendent Angel has crazy value! She generates a 4/4 Angel token with vigilance whenever you can gain 5 life during your turn. This gets even crazier with multiple Resplendent Angels in play. Scroll of Avacyn, Bishop of Wings, Lightning Helix, Seraph Sanctuary, Firemane Avenger, and your numerous creatures with life-link help achieve the necessary life-gain. Plus she can even bulk-up to a 5/5 lifelinker if you have 6 mana to spend.

Firemane Avenger should be played strategically when you already have two other creatures in play to trigger Battalion. She functions as a recurring Lightning Helix and also serves as a trigger for Resplendent Angel and Archangel of Thune.

Shalai, Voice of Plenty is a mandatory inclusion, even if the deck doesnât run any Green mana, because she bestows you and your entire army with hexproof, which is very helpful against Black or Red decks with heavy removal.

Serra the Benevolent is a versatile 4-drop. I primarily use her to immediately generate an Angel token. However, her +2 ability gives all of your flyers +1/+1, and this is very useful when you have numerous Spirit tokens and Segovian Angels on the board, and you are short on mana to cast a 5-drop.

Lyra Dawnbringer is a powerhouse and bestows your angelic army with lifelink. If you can keep her alive, you will generate huge amounts of life.

Archangel of Thune starts small but quickly grows herself and your army each time you trigger life-gain. That means each individual instance of life-gain pumps up your entire army! Between the Archangel, the Dawnbringer, and your many life-gaining spells and abilities, your life-gaining potential is astronomical.

Aurelia, the Warleader bestows you with two Combat Phases and is a perfect finisher. With Aurelia, an Archangel and/or a Dawnbringer, and a few other angels in play, you can easily deal over 10-30 damage per turn. The game should be over once she hits the board.

Embercleave is a new addition I am currently testing, but it seems very effective as a surprise finisher. It has Flash and it is likely you will be able to reduce its cost to only 2 Red mana. Bestowing trample can be critical when going up against creature-heavy builds.

Arid Mesa and Knight of the White Orchid help search for Sacred Foundry when you need it. The life-loss caused by Foundries is negligible when you can gain life rapidly. I included a single Clifftop Retreat as a backup because it usually enters play untapped.

The life-gain from Seraph Sanctuary is a great tool for triggering Resplendent Angel along with Bishop of Wings, as well as Archangel of Thune.

Castle Ardenvale is a Human token generator if you have mana to spend, but nothing else to spend it on. It comes in handy when you need a chump blocker and do not want to sacrifice an angel.

Cavern of Souls is included to protect against counterspells and help cast Firemane Avenger and Aurelia, the Warleader.

The goal is to gain momentum early. Turn 1 Segovian Angel, Scroll of Avacyn, or tapped Sacred Foundry is ideal, followed by Turn 2 Knight of the White Orchid (to search for a Foundry), Bishop of Wings, or Lightning Helix.

On Turn 3, Resplendent Angel will generate an Angel token with Bishop of Wings and Seraph Sanctuary in play, or if you activate Scroll of Avacyn with an extra land from Knight of the White Orchid last turn.

On Turn 4, play Firemane Avenger if you can meet her Batallion threshold, Shalai, Voice of Plenty if you expect targeted spells, or smaller Angels like Serra Avenger to help reach the Battalion threshold.

On Turns 5-6, try to stick Lyra Dawnbringer, Archangel of Thune, or Aurelia, the Warleader. Once you have an army of hasted, flying, lifelinking angels, the opponentâs only hope is to wipe the board before it is too late.

Authority of the Consuls provides an advantage against creature-heavy builds. Blood Moon shuts down non-Red decks and Tron, although it must be played carefully so you have access to enough White mana. Day of Judgment wipes the board if you are going up against a deck that generates creatures faster than you. Leyline of Sanctity shuts down Black and Red decks that target you directly. Oblivion Ring deals with any threat. Rest in Peace crushes graveyard manipulation decks, especially Mono-Black. Revoke Existence is a sorcery but can exile annoying indestructible enchantments and artifacts.

I normally play Black so designing a White deck is difficult for me. Comments and suggestions are welcome!