Dropping that Soap
by SaSSolino8 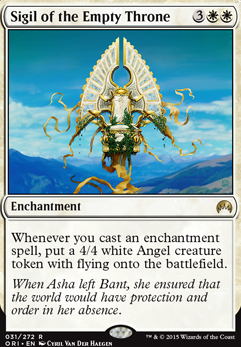 Zur Lives In A Society
by SoggyBagel

DuTogira, not to go after @SynergyBuild's argument but he/she seems like a troll that shitposts on other people's profiles. Just check out there wall lol. Either way, the Phyrexian Unlife + Solemnity combo has been around for quite awhile now thanks to MagicAids. In the end it Magic is nothing more than a race (i.e. who can kill the opponent first, establish their combo/hard lock first, etc..).

I have toiled in numerous builds with this hard lock combo and came to the conclusion moderns meta has plenty of answers to it in the forms of hand disruption, countermagic, permanent removal (targeted/mass), and land disruption. All of these are very prevalent at the moment and make linear combo decks very hard to pull of successfully. Nonetheless, it doesn't mean you can't make the deck redundant enough to survive a T1 Thoughtseize, T2 Blood Moon, or T3 Oblivion Stone/All Is Dust.

May a recommend adding Greater Auramancy and Wrath of God / Supreme Verdict to the main or sideboard?

I wish i had a life

I really like this one. I am building something similar but I'm trying to squeeze in the Phyrexian Unlife + Solemnity combo. Looking at your list could use a couple more of Eladamri's Call or Melira, Sylvok Outcast to get the combo online a bit faster. Altar of Dementia seems to be your only sac outlet so I'd run a full playset. Perhaps splash a bit black and run Viscera Seer or run Culling Dais . And since we are milling them why not add a copy of Ulamog, the Ceaseless Hunger into the mix?

BMHKain on What cards would you recommend ...

Update: There is already a thread regarding this; & for those who have an ambition for this kind of deck, I suggest you check that post instead. This can be closed BTW. One last thing, I might discontinue my Aminatou, the Fateshifter deck after all this... I wonder how the Phyrexian Unlife + Solemnity works in there though...

Great deck, +1 from me, probably going to slowly collect the cards to assemble this deck!

I haven't really played Modern, but am familiar with the decks in theory. Anyway, why do you need 4x Path to Exile when the Phyrexian Unlife + Solemnity lock makes creatures useless against you? I would swap 1 Path for 1 Dispel to protect the lock and the combo from removal and counterspells, and maybe add in one more Dispel in the sideboard, along with Stony Silence against Affinity.

I like pillowfort as an option for Hannah. I think that going with the Decree of Silence + Solemnity is fun, but as a back up Phyrexian Unlife + Solemnity is also a game winning combo. For protection, Ghostly Prison, Propaganda and Sphere of Safety like Suns_Champion has suggested are all great options. Also Greater Auramancy to protect your combos, and Copy Enchantment + Greater Auramancy means that no one can target your enchantments. Ever. Add Enchanted Evening and not only is this combo insane, Sphere of Safety becomes something that says players cant attack you. Would love to see what you come up with after its through, and good luck!

NV_1980 I really appreciate your feedback, you've helped me immensely on this deck. As for your recent suggestions, there will be changes at a later date. But as of right now this deck was built with a specific game in mind: Star, Pentegram, or Color-War (whichever you prefer). That's why Guardian of the Guildpact and Black Ward are included, as I know what colors my opponents will run and everyone is using mono-color decks. Those will be replaced after this specific game is played. Axis of Mortality is also in there for that game because it will allow me to not only to protect myself, but also aid my allies in a pinch. It also pairs nicely with a win condition involving Phyrexian Unlife + Solemnity . Odric, Master Tactician and Tundra Wolves are just personal favorites of mine and I can't bring myself to cut them. I'm taking your other suggestions under advice currently.