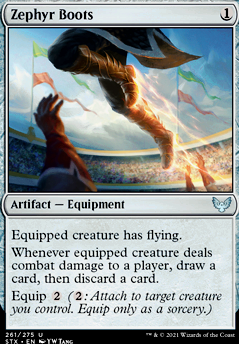 Whenever equipped creature deals combat damage to a player, draw a card, then discard a card.

Rog and Jeska
by SweetDreamsies 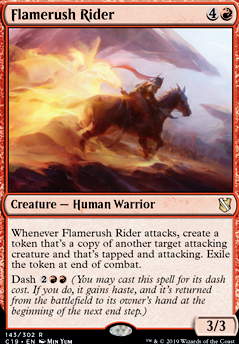 So I acquired some of the cards that have been kindly suggested (thanks multimedia) and have made the following changes. The cards from Modern Horizons 2 will be on their way soon too so I can add those in.

Access Tunnel in for Temple of the False God : More ways to send in unblockable damage, in exchange for a land I often found in my hand and wished I had a basic instead!

Viscera Seer in for Ankle Shanker : Love the mad little goblin, but his attack trigger was poor synergy with Alesha's ability so he makes way for the Seer and his free sacrtifice outlet.

Zephyr Boots in for my foil Anointed Procession : Starting to take apart the mild Tokens subtheme to this deck. Maybe I can make this one be part of a Mardu Tokens deck at some point, but for now, giving my Commander Flying for cheap seems a better deal.