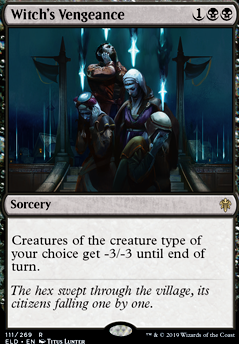 Creatures of the creature type of your choice get -3/-3 until end of turn.

Witch's Vengeance occurrence in decks from the last year

Flip flap and slap
by Bubkiss

Apollo_Paladin, I appreciate the suggestions, though there are a few problems with them.

Sorry I took so long to reply and my reply seems like I shitting over your suggestions. I do appreciate the time and effort you took to comment.

Neat build! Mono-color decks tend to be highly underrepresented in my experience & they are also a favorite of mine.

Hope some of this helps, but either way I like your direction!

For mono-red aggro at least (which was mentioned) Witch's Vengeance absolutely annihilates them, as generally it's either Goblins or Elementals - GG.

In regards to the first comment on the list, there's also stuff like Witch's Vengeance which is more of a targeted boardwipe. Most effective against tribal builds granted, but it's even useful for stuff like clearing out an opponent's Paradise Druid s or w/e from even a non-tribal construction.

It's a lot easier to avoid your own key stuff with Witch's too; I've got it in a couple different decks on Arena actually.

Mtg_Mega_Nerds on How to kill things of â¦

Thanks for your comments TonyRik! Glad you like the deck! Itâs nice to hear from a fellow zombie aficionado.

You are right that we have lots of great mass removal options now, including Witch's Vengeance, Extinction Event, Crippling Fear, Blood on the Snow...etc. Rise of the Dread Marn is a great option to take advantage of mass removal because it can be foretold and cast later as an instant for only 1 mana. I think Rise would work well on the sideboard, so it can be brought in as a soft-counter against other decks running removal, or against creature-heavy decks, since it creates zombies when any creature dies, not just my own.

And thanks for clarifying that snow zombies only get buffed once by Narfi, that makes sense. Iâll fix the description.