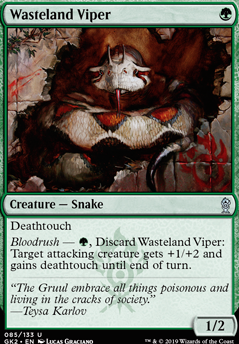 If you can get combat hits in easily then double strike equipment would be the way to go.

You have 2 copies of Wasteland Viper listed.

Is Dryad Militantâs ability necessary here? I would consider moving it to sideboard in case of some grave spell casting decks, but normally would play Nettle Sentinel, Young Wolf or Wasteland Viper. I have a similar deck - but mostly rely on instants than counters - and Boggart Ram-Gang plays very well. It is fast, costly to block due to wither and gives 3 devotion.

Also for counters Predator Ooze and Hydra's Growth would be a nice add on.