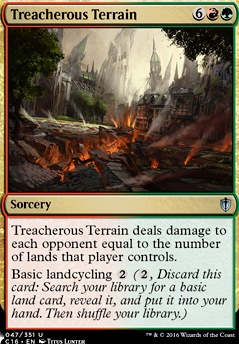 Treacherous Terrain deals damage to each oppopnent equal to the number of lands that player controls.

Basic landcycling (, Discard this card: Search your library for a basic land card, reveal it, and put it into your hand. Then shuffle your library) 1 Small Pip for Mana, 1 Giant Leap for Manakind
by StasisAbuser

Wort: the Ramp Mother of Burn

Another list I'm in love with that I find out is by you.

Got a couple cards I'm curious about

Hour of Promise - 2 of any land lets us fetch up our strong utility lands (valakut, kessig wolf run)

Also this might be too meme-y but what about Repercussion . It seems like at least something to think about when you are running 13 or 20 damage board clears. Repercercussion + Star or Blasphemous can make for some gross things. (I know this one's a bit of a stretch given your 'don't play permanents' policy...however, it does give you a way to nuke a creature while still damaging it's controller.)

Scapeshift makes an interesting combo with Valakut as well. Sacrifice your lands to bring out valakut+mountains for an X based nuke spells where you change lands in play to lands from your deck. (Which gets them out of your deck for more live draws)

Animist's Awakening spell mastery is super easy to attain in this deck. Brings any land into play and we love copying X spells right? With a nice enough X and a big enough hit you most likely could follow this up with more ramp.

Collective Unconscious 1 more mana than shamanic revalation but still a good effect for draw in a token deck.

Treacherous Terrain it's no X spell, but it hits everyone for a decent chunk, especially when copied and combos with..

Tempt with Discovery if everyone in a 4 player pod says yes, and it's copied... you come out with 8 lands while giving the table 6, spread across 3 players. Grab that Valakut+a bunch of mountains and have fun :D (Worth note: My meta doesn't play with any 'must destroy' lands because we are like a 30-40% power level meta... so it might just be better for me as a meta call)

Pir's Whim honestly one of my favourite green cards. Ramp 2 of any land, destroy 6 artifact/enchants for 4 mana? Seems good. (Can also be used to buy some political favors for ramping another player.)

I think that's probably enough things to think about for now haha.

Mortlocke on How mean is "too mean" â¦

"How mean is "too mean", what do you consider off limits, and most importantly, how do you counter land-based ramp strategies if you can't touch the lands?"

So how mean is too mean?

What do you consider off limits?

Personally I have no issues with any single legal commander deck strategies. I do take issue with illegitimate strategies though i.e. illegally using multiple copies of cards, using unglued/unhinged cards etc. I mean, my "best deck" if you will is Slivers so I don't have much room to judge others on what is considered "valid" for EDH.

How do you counter land-based ramp strategies if you can't touch the lands?

Have opponents who have land-ramp based strats? That's just fine. Hit them with the following spells late game and reap the salt.

Ithyn on The Final 5 Partners

The Rakdos one should say "When CARDNAME etb, CARDNAME deals damage to each player equal to the number of lands that player controls." All damage in Magic has a source. Things don't just take damage.

The ability on the Rakdos one is also, to my knowledge, more of a Gruul thing. See Treacherous Terrain.

I have never liked Wort, the Raidmother ever. I never gave her a second thought, but this deck seems amazing, and I love your choices. A conspired Treacherous Terrain? Brutal. Benefactor's Draught? Beautiful. I really like your list, +1. You've earned my upvote.

Why not Treacherous Terrain and Hull Breach?