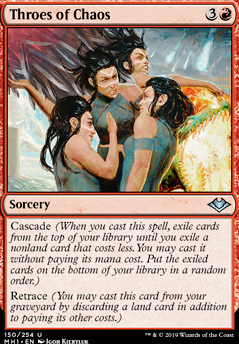 Throes of Chaos occurrence in decks from the last year

averna, the chaos!
by samuelrocks 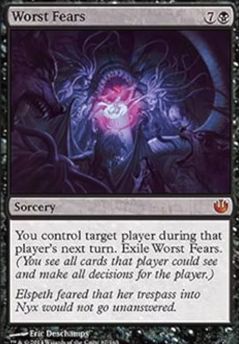 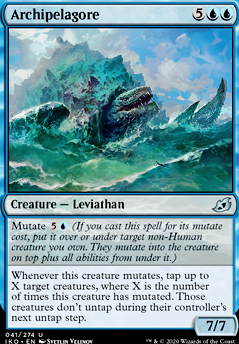 If I have Krark, with no thumbs on the battlefield and I cast Throes of Chaos , if I get tails, do I still cascade, and if I get heads, Does the copy Cascade?

Averna, Blooming Chaos: There's what, 6 cascade cards outside of this set, some of them being stuff like Violent Outburst? And apparently, there's 13 more in the set, plus this one and another that somehow mentions cascade? Dunno if that's enough to support a deck, although I guess there's bouncing and Throes of Chaos to extend things. At least Yidris

will appreciate the 99 help.

Court of Cunning: it's neat that mill is picking up steam in EDH, and I like "super mode" monarch cards, although it being an upkeep trigger is kind of rough; pillow fort reward if nothing else

Zara, Wind Raider: pretty swingy; sometimes your opponent won't have a creature at all, sometimes a Blightsteel Colossus will peek out of their hand. Include Ashnod's Altar to basically make it a discard trigger, or maybe try to prevent the casting of big creatures somehow to recycle the same one again and again. Beware the skies, Ilharg, the Raze-Boar!

Gor Muldrak, Amphinologist: disappointing that this can't go into my Marisi deck. I do think the proxy combat theme benefits a lot from , so I'm kinda iffy on this being on the helm for that. Maybe some partner combination? Also, whew is this an obscure reference.

Throes of Chaos from modern horizons is cheap, on colour, and retrace can be meaningful. Just one or two copies will help reliability immensely.

The second thing to plan is sideboard options-budget constrains many standard options sticking you with a more limited set-Faerie Macabre for example.

Yidris has been by far my favorite to brew. It started off with cascade is cool and here's big dumb stuff and then slowly involved into combo/ good stuff. It has been a lot f fun trying out different things with it. I used Throes of Chaos for a bit just because of cascade retrace as the "only" words tickled me.

Also had a lot of fun brewing Locust god. When it was previewed i saw someone comment about skullclamp and ashnod's altar and went from there. The wincon of the deck is the basic locust god win, but the rest of the deck was really whatever i felt like. (I started out by typing draw a card in gatherer and took whatever i liked from there for the first pass of the deck)

These are the two decks that i always look forward to preview season for because i love to keep updating them.