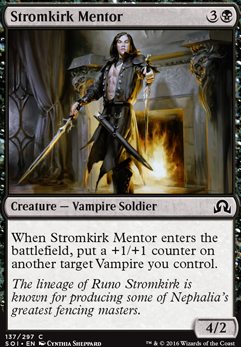 When Stromkirk Mentor enters the battlefield, put a +1/+1 counter on another target Vampire you control. 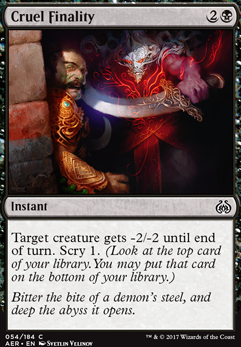 Personally I would change Bold Impaler with Insolent Neonate since its more flexibl and can trigger madness I would also change Stromkirk Mentor with Incorrigible Youths since it fits more into your aggro plan , and can also trigger off madness to become super cheap, and they curve really well with Furyblade Vampire that's potentially 8 damage turn 3 with just two cards.

And I would also change Bloodmad Vampire with Heir of Falkenrath  Flip since in my opinion thats one of the strongest vampires in standard. It's a 3/2 with flying that triggers madness for one black & colorless, that's insane! It's also dirt cheap

It's a good start for a budget deck. If you're interested in getting more competitive, cut many of the cards that aren't important to your strategy, and include more copies of the cards that are. For example, you probably don't want cards like Stromkirk Mentor, and Elusive Tormentor  Flip and you probably want a full 4 copies of Gifted Aetherborn and Stromkirk Condemned. Also, cut your deck down to 60 cards. It makes it much more consistent.

Rakish Heir seems better than Incorrigible Youths as you don't need to discard anything and buffs your vampires. Stromkirk Captain seems better than Stromkirk Mentor because it is a more universal boost. Markov Blademaster I think would work better than Furyblade Vampire because you don't have that much madness. Phyrexian Arena can help you draw cards because you have a pretty low cmc. Necropolis Regent seems better than a Chancellor of the Dross as it buffs your creatures. Bloodlord of Vaasgoth seems like a better Markov Dreadknight because you don't need to discard anything. You have two Terminates, maybe replace one with a Feast of Blood? Curse of Bloodletting instead of Mark of the Vampire seems good. Blood Tribute seems pretty good. Kalastria Highborn is better than Falkenrath Noble. BTW, you are down four cards.

cut Elusive Tormentor  Flip Cryptbreaker Markov Crusader Alms of the Vein Welcome to the Fold Reckless Scholar Bloodmad Vampire Markov Dreadknight Stromkirk Mentor . most of the reason for these is too little effect for high mana, or not enough synergy. Instead add Asylum Visitor Heir of Falkenrath  Flip Stromkirk Condemned Olivia, Mobilized for War and Collective Brutality .

If you want a great deck cut the blue and just go Red Black. the blue cards don't have any effect that red or black doesn't except counterspells but this deck doesn't need them. blue right now makes the deck less consistent in mana draws, and will give less odds to find a useful card.

I am sorry if I am destroying the identity of the deck, I am helping it to be a win more games.