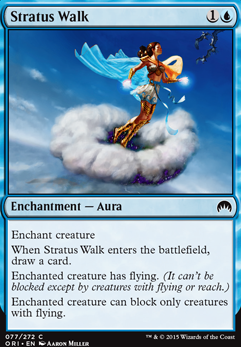 When Stratus Walk enters the battlefield, draw a card.

Enchanted creature can block only creatures with flying.

It looks like this deck was built from a limited collection of cards. While not an invalid strategy, you'll probably have more success by brewing a prototype here and purchasing the singles. If your expectations aren't too high, it's pretty easy to make a solid deck on a budget. To start with, I'd identify what cards, abilities, or strategies you like in green/blue and focus in one 1 or 2. Then, search around to see if anyone else has built decks with similar ideas. This may give you some inspiration for what cards and combos you want to build around. Just from what you have here, I see some paths you could take. Satyr Wayfinder and Tome Scour could be in a graveyard focused deck with cards like Splinterfright and Mindshrieker. Axebane Guardian and Crush of Tentacles could be in a ramp control deck with cards like Kruphix, God of Horizons and Plasm Capture. Setessan Oathsworn and Stratus Walk could be in U/G heroic with cards like Battlefield Thaumaturge and Solidarity of Heroes. All of that is just scratching the surface though. With some exploration, you should be able to find an archetype that fits your style. Then, you can get to adding the meat of the deck.

+1 for using one of my favourite creature types :)

I'd add a few Mistform Warchiefs to help with "ramping". looking at you instant-selection, I'd totally consider either Isochron Scepter or Elite Arcanist to be a total dick ;)

Stratus Walk seems a little superfluous, since most of your guys already have flying or some other form of evasion.

Dismiss into Dream is a fantastic and flavourful card, but it works a lot better in a deck with plenty of abilities and spells with which you can target your opponents' critters. You could check out my deck A Dream most cruel to see what I mean ;)

Keep up the good work, dude

In case you wanted to add white and blue, Deft Duelist, and Gwafa Hazid, Profiteer are both pretty cool! But, a little of the colour of the deck I appreciate.

Other cards of note, alongside Cloak and Dagger, I do like Mask of Riddles. Fun the equipment and make those hard to block guys become awesome! Or if you'd rather play some Auras, then how about Aqueous Form, Stratus Walk, Infiltrator's Magemark, and if going white and black as well (which is unlikely of course lol), then you do get Steel of the Godhead.

So just some things to think about! Rogues are awesome, make the deck as fun and interesting as I know it is in your mind. Hopefully some of this will help.

i dont think that the enchantment removal and ephara are good enough for modern. in a mentor deck i recommend, Serum Visions, Gitaxian Probe and Path to Exile but it depends on the budget. since you are playing same heroic creatures I'll suggest Slip Through Space, Defiant Strike, Gods Willing and Stratus Walk

Emerge Unscathed is your best friend. Double heroic proc with many uses including evasion. You can run Center Soul too if you need more than 4 copies.

Ordeal of Thassa is strong easy draw in this deck. Half of the time when you slap it on they already have enough counters.

I'm guessing running out of cards to play to keep up the heroic engine is a common theme in this deck, so here's a few more spells that replace themselves after triggering heroic: