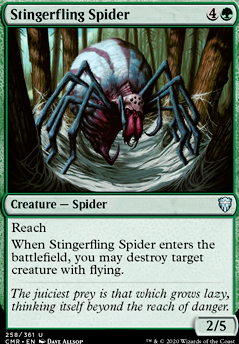 When Stingerfling Spider enters the battlefield, you may destroy target creature with flying.

Stingerfling Spider occurrence in decks from the last year

Acidic Slime is reasonable, maybe Stingerfling Spider ? Other than that CMC 5 is really kinda dry in mono-green

Composite Golem has a 5 color identity.

Pelakka Wurm big beats, draws you a card/gains you some life, some people says it's better than Thragtusk.

Yavimaya Dryad ramp with a weird form of evasion, on a creature as well.

Engulfing Slagwurm big beats that if given a Lure effect or maybe trample just tears through a defense.

Acidic Slime it's the green commander staple, blows stuff up.

Brutalizer Exarch it's an acidic slime only mostly better.

Triumph of Ferocity kind of another draw engine enchantment.

They all want the "Doran"

Sight of the Scalelords teehee

Elvish Mystic, Llanowar Elves, Fyndhorn Elves, Boreal Druid and Arbor Elf are all great accelerators, which is one the biggest strengths of elf tribal. I really think it would be very good to add all of them if possible.
Some more utility creatures for your consideration: Dwynen's Elite, Wirewood Hivemaster, Eternal Witness, Somberwald Stag, Yisan, the Wanderer Bard, Acidic Slime, Whisperwood Elemental, Oracle of Mul Daya, Primordial Sage.
Your deck looks to be fast and aggressive, so i don't think defensive cards like Gravity Well and Whirlwind are all that useful, unless your metagame really requires those cards (i can somewhat understand that choice if you are regularly playing against commanders like Kaalia of the Vast). But even then, isn't it better to have that effect in creature form, which would make it easy to find the answer card when you actually need it? My ideas for that would be Tornado Elemental, Cloudthresher, Stingerfling Spider, Duplicant or Somberwald Stag.
Some other cards that i think are suboptimal: Vedalken Orrery is a great card, but it only really works in a deck that wants to react and sculpt its plan based on what the opponents are doing. However, in my eyes your deck is very proactive and would rather spend mana on advancing its board so Ezuri or Craterhoof can win the game. Skyshroud Claim is also a good card, but many of your cards cost 3-4 mana, and it doesn't really help you cast those early. The 1cmc mana elves i suggested above do that job much better, and the fact that they are elves is relevant in countless ways.
Since you have some powerful lands that you really want to have access to whenever possible, Sylvan Scrying could do a good job in your deck. Also, if you want any more card draw effects, Recycle can draw an insane amount of cards (it also triggers of lands being played). It has some very serious drawbacks, but those don't really matter if you win the game within 1 or 2 turns of casting it. In the same category of cards, Abundance can guarantee you will never draw more lands than you want, which means you can just choose to draw all spells with your Regal Force. And since all your draws are replaced by its effect, it incidentally stops Nekusar, the Mindrazer dealing damage to you.


Trying to further lower curve and shift away from artifacts to monogreen.
Splitting Slime left for Soul of Zendikar. The two fulfill more or less the same role, changing where you pay the mana (Slime more pricey overall), but Soul changes out bigger tokens for reach, which is more important since this deck has issues with fliers.
Kuldotha Forgemaster was ok, but Yisan should give better returns, though without a real way of manipulating the counters, he only gets one run through the chain. The activation cost should also be easier to deal with especially given the shift away from artifacts.
The remaining five cards simply didn't seem to be pulling their weight, so were changed out for draw, more ways of dealing with flying, and evening out the curve for Yisan, providing a second option at both 1 and 4 CMC.

Hey NINJAxPENGUIN92, that's for the reponse.

I trim some of the fat and cleared out some of the lands to bump it to 40 (Keeping the Terramorphic Expanse and Evolving Wilds to help deck thin a little and to search the occasional Wastes). Not sure on Amulet of Vigor but I do want Boundless Realms and maybe Scouting Trek.

I also know that there are definatly upgrades that I really want to do (Silklash Spider for Stingerfling Spider and Genesis Wave for Lead the Stampede are couple) But budget contrats and somewhat small card pool at my locals (live in the country) makes it difficult. I hope to get some upgrades over the next several months. :)

Breeding Pool, Flooded Grove, Temple of Mystery, Botanical Sanctum, Hinterland Harbor, and Yavimaya Coast are all relatively cheap (except for the Grove), and will do way more for the consistency of the deck than adding a singleton of Jace - unless, that is, you're going to go for a strong "basics matter" subtheme, which it doesn't look like you're doing.

As far as the deck proper goes, Krasis Incubation, Terrifying Presence, Pulse of Murasa, Reclaim, Natural Connection, Learn from the Past, Nissa's Judgment, Map the Wastes, Contingency Plan, Deep Reconnaissance, Incremental Growth, Vexing Scuttler, Sylvok Replica, Stingerfling Spider, Sigiled Starfish, Shambleshark, Lashweed Lurker, Embodiment of Spring, Dawntreader Elk, Conclave Naturalists, and Borderland Ranger can all be cut. I don't wnat to be frank, but I feel like I have to - those cards are bad. They're simply too low power. From a pure powerlevel perspective, you're going to find yourself outgunned. And although it's really tempting to look for cards like Torrential Gearhulk, Scroll Rack, and Sensei's Divining Top that are "staples" in EDH and are super popular and expensive, those are only really worth it if you've already got a high-power deck filled with high powerlevel cards because it adds consistency to your draws and lets you use your high powerlevel cards to their fullest. I also think that although Scroll Rack and Top are super synergistic with your commander, you should probably save them for last because they're so expensive and relatively low-impact compared to your actual win conditions. If you're on a budget, consider Crystal Ball - although it's a little bit more expensive manawise than either Scroll Rack or Top, it's still pretty damn good.

Your deck is not high powerlevel, sorry to say - although selecting one of your top 3 cards seems really good, it's absolutely godawful useless if the top three cards are Conclave Naturalists, Sigiled Starfish, and Krasis Incubation. Instead of looking to the big ticket cards for power, which will be inconsistent, you should be looking at cheaper synergistic cards - Things that will only cost you a buck or two like Dig Through Time, Vedalken Orrery, Mystical Tutor,Courser of Kruphix, etcetera.

Now with those cuts, that leaves you with 21 extra slots to put in cards that help you with your goal. We need to take a look at your mission statement for the deck and build an idea around which the deck will be built - you said that "The goal is to utilize Rashmi to get insane value from casting cards for free and stealing and copying my opponents cards. Currently has a counters subtheme with most of the creatures". So what can we do with that? Well, looking at clone and stealy effects, you're missing a few really good ones - Stunt Double, Clever Impersonator, Sakashima the Imposter, Cryptoplasm, Progenitor Mimic, and a personal favorite of mine, Phyrexian Metamorph. As far as stealy effects go, there's no shortage in blue. Thada Adel, Acquisitor, Bribery, Treachery, Corrupted Conscience, and Treachery (although this might be a bit out of your price range).

Spelljack is a little costly for a mere counterspell, but it's right in your niche of stealing spells. Cultural Exchange lets you trade away some garbage mana runts for their biggest beatsticks, and Perplexing Chimera is just a lot of fun.

Now all these cards combined will probably not even come close to equaling the cost of a single JTMS, but it'll be much better for your deck if you pick these guys up because your $100 of power isn't focused on one card that you rely on to really blow up your opponent. Instead, it's more evenly dispersed and distributed to make sure that more of your draws are live gas, and less of them are shit like Reclaim.

Also, if you still want better ramp, cut the Simic Keyrune for a Simic Signet, and use Cultivate and Kodama's Reach for your oneshot spells. Although they only drop one land each, they set you up for consistent land drops further down the line, and guarantee you access to both colors.

If you're still interested in a +1/+1 counters subtheme, I've got a lot of ideas, but since you said you're probably gonna phase that out, I'll leave those for another time.

Not a bad start for Ezuri, but as a fellow Ezuri fan, a few suggestions.

Instead of Overrun use Overwhelming Stampede I'm in the process of ordering another one for myself. Also, Inexorable Tide + Primal Vigor are beautiful enchantments to consider. Instead of Ezuri's Predation, I recommend Cyclonic Rift. Also instead of Stingerfling Spider use Silklash Spider, Also look into getting Rashmi, Eternities Crafter, Momir Vig, Simic Visionary, and Avenger of Zendikar for the deck, maybe using Avenger to replace stuff like Great Oak Guardian?

That's what comes up off the top of my head, here's a link to my own Ezuri deck for more ideas if you want.