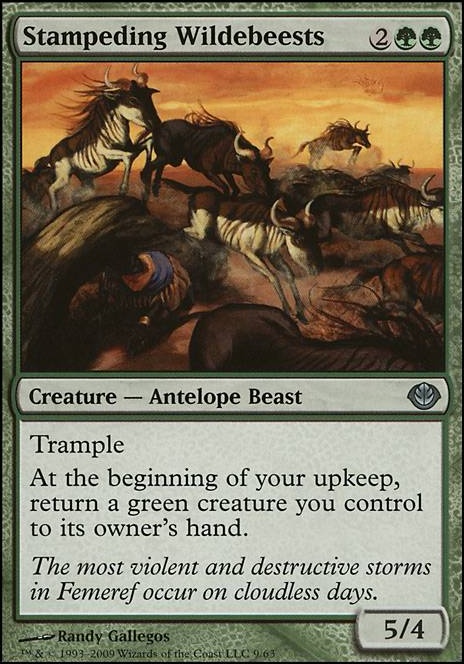 At the beginning of your upkeep, return a green creature you control to its owner's hand. 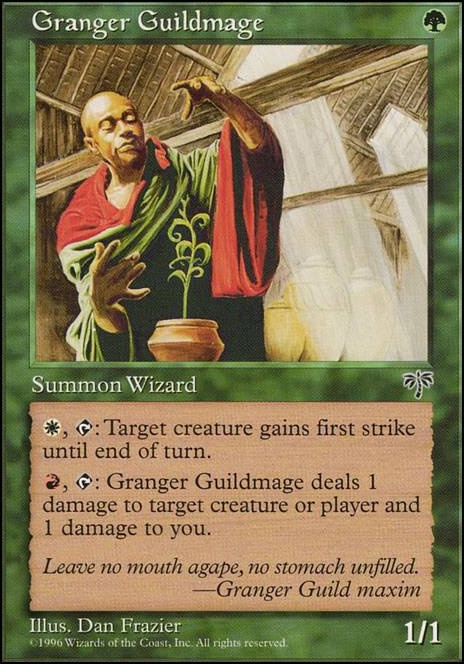 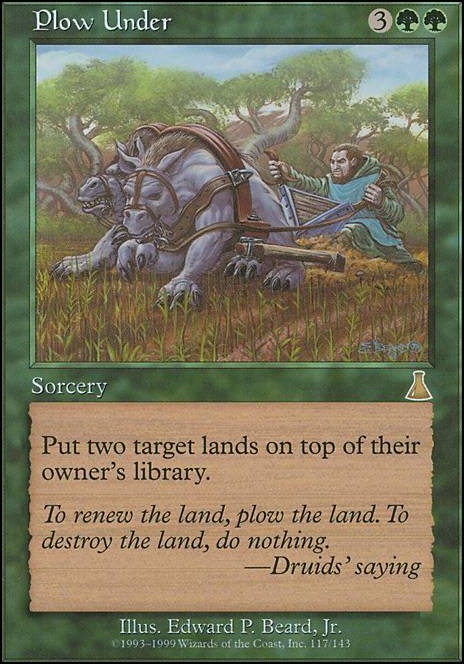 At the Zoo
by zachz 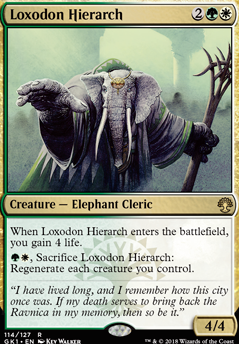 Hey big fan of the deck list. Gunna make it in paper soon. Some questions, ever think about adding Waterfront Bouncer or Stampeding Wildebeests or Temur Sabertooth to go infinite with Eternal Witness and a Time Walk effect?

Also Equilibrium and Erratic Portal do something similar but arenât creatures so less synergy. I like Waterfront Bouncer the most out of all the options because of its low mana cost so it can contribute to your early game plan of being aggro and drawing cards and can bounce opponents hate bears and also transitions later into your combo.

Nostalgic Dreams and Skullwinder seem like very decent options too. Dreams has little downside if youâre swinging with your creatures and Skullwinder is E-Witness number 2 that requires very little play around.

Since the number of things that produce squirrels is limited, you may want Fauna Shaman for additional search to get the hermits, etc. and perhaps something like Stampeding Wildebeests that can bounce them back each turn to make another squirrel token engine.

I don't know if this is a good suggestion but maybe Savage Swipe . You definitely have enough 2 power creatures. Although I wouldn't recommend just playing a Prey Upon so I don't know. I do think however that Temur Sabertooth would be good for sure. It's not a bear but it could let you easily bounce your cheap (2 mana) bears back to your hand to get extra ETB effects. Decoction Module , Roaring Primadox , Stampeding Serow , Stampeding Wildebeests and Ambush Krotiq all have a similar effect but I don't think they are all worth playing. I also think that maybe Conjurer's Closet or Mimic Vat could be good additions. I think since bears aren't a supper strong tribe by them self your best bet is to maximize the ETB effects. (Which seems to be what you're doing.) I would say you could take out a few of the 2 mana 2/2s just because they don't do too too much and you seem to have a lot of them but I don't know. Like you said there aren't too many bears. Anyways I hope this is helpful. :)

Rhystic Study instead of Mystic Remora would be a solid upgrade.

Also, I see you have plenty of enter the battlefield effects, but no real way to flash them in and out once they've landed. Roaring Primadox , Stampeding Serow and Stampeding Wildebeests will help you get more out of your stuff! And since you mentioned draw card mechanics, Elvish Visionary is a nice, cheap way of getting more cards into your hand.

As far as win conditions go, since you have green, I think the easiest thing to do would be to throw in an Overrun , God-Eternal Rhonas or another similar effect.

StoryArcher,
First, the deck looks really fun. A few thoughts though, in no particular order:

Also, I TOTALLY get the desire to make a deck competitive "without necessarily carbon copying someone else's card list", but I always recommend starting with other lists and then tweaking (sometimes drastically) to fit our meta and playstyle. If you haven't already, I'd strongly recommend looking at these:

This is absolutely my favorite style of deck and I'd like to take it seriously competitive without necessarily carbon copying someone else's card list. I've decided to go heavier on the removal aspects, making up for fewer creatures with some recursion effects via Stampeding Wildebeests and being able to go get what I need when the time is right with Primal Command. I'd be very interested in anyone's serious thoughts on the archetype and this deck/approach in particular. If you think that there is a card that I'm lacking, please let me know what you think I should remove to make room for it and why. If you're curious about the reasoning behind my various choices, I go into detail in my deck description.

I've had a lot of success with this deck early on, but I'm stepping up in competition and I'm interested in learning about as many facets of this strategy as possible from those who've played it or played against it. Thanks in advance!