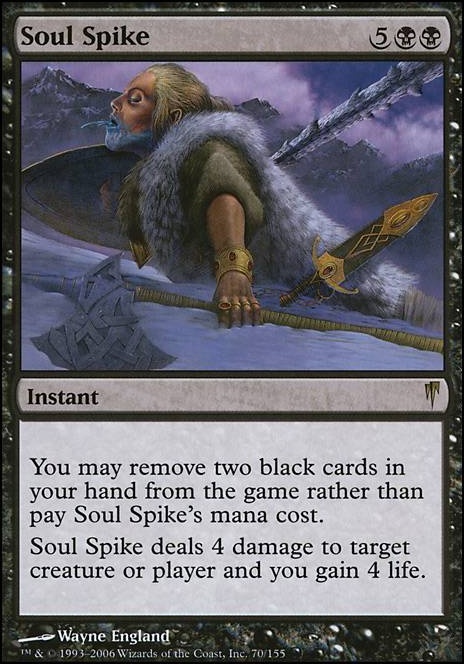 You may remove two black cards in your hand from the game rather than pay Soul Spike's mana cost.

Soul Spike deals 4 damage to target creature or player and you gain 4 life. 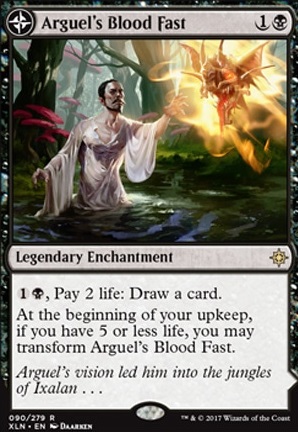 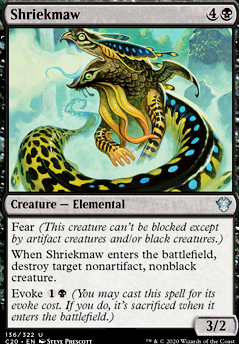 You might consider these for speeding up the deck: Lotus Petal , Fellwar Stone , Blood Pet .

Mirror of Fate could be neat here. It lets you reuse cards exiled by Yawgmoth's Will. You can even recur the Mirror itself this way. There is a wombo combo here alongside Will + Bolas's Citadel + Tendrils of Agony . Not that you need another combo haha. But it could be fun to switch things up if you get tired of Glacial + Dreams, or wanna keep your opponents on their toes.

These cards seem like they might have a home here or in a similar build: Necropotence , Soul Spike , Spinning Darkness , Blood Tithe , Sorin's Vengeance , Sovereign's Bite , K'rrik, Son of Yawgmoth , Skirge Familiar

sylvannos: Why not just go for the gold with 4x Chancellor of the Dross , 2x Soul Spike ;)?

I don't like Scheming Symmetry , as you are losing a card for the tutor, not putting into your own hand is really painful. I do agree that it could be fun with some of the listed cards, but I don't think it will work as a two card combo, I thinnk it would need to be more "1 card combo", but I might be wrong. I do sort of hope it finds it's way into a storm list or somthing.

Madcookie on If I Soul Spike myself, â¦

Life total always changes, but appears as if it didn't because since its part of the same resolution, state-based effects aren't checked. In this regard it is similar to having lethal damage unblocked but staying alive due to lifelinking attacker.

Say you are at 4 life and you Soul Spike yourself. The spell resolves and first you lose 4 life and go to 0 life, your draw 4 trigger is queued to be put on the stack but as of this time does nothing, then you gain 4 and go back to 4 total. Then since the spell has resolved, state-based effects are checked and since you are at 4 again it appears as if nothing happens. (Unlike another card game where if you Ultimate infestation yourself for 5 dmg while at 5 life, you still die despite gaining 5 armor from the same spell). Only after all this you will draw 4 cards from the m20 card (I forgot the name)

Tyrant-Thanatos on If I Soul Spike myself, â¦

I'm fairly confident of the answer here, but just to be sure:

A card was spoiled for M20 that reads (in part): Whenever you lose life, draw that many cards.

And it got me thinking: If I cast something like Soul Spike targeting myself, it will trigger for 4, even though my life total didn't actually change, right?

Thank you for your comments! I added some of your suggestions. I highly recommend you check the maybeboard it has a lot of cards that could fit in the deck depending on your meta, playstyle and how much damage you are willing to take from Demonlord Belzenlok .

ShinyZ, in regards to protection for Mikaeus, the Unhallowed and Triskelion from exile cards such as Path to Exile you can always Soul Spike + 1 dmg with Triskelion to kill Mikaeus, the Unhallowed in response and then cast Living Death . However if in your meta you still have problems keeping your combo online, you can always have alternative combos such as Exquisite Blood + Sanguine Bond or Lich + Repay in Kind . In regards to Solemn Simulacrum I think there are simply better ramp cards (check the ramp section in the maybeboard, I think I have most of the 4 cmc ramp cards).