Sludgy Side Up Eggs (Pauper EDH)
by Dracule_Akamu 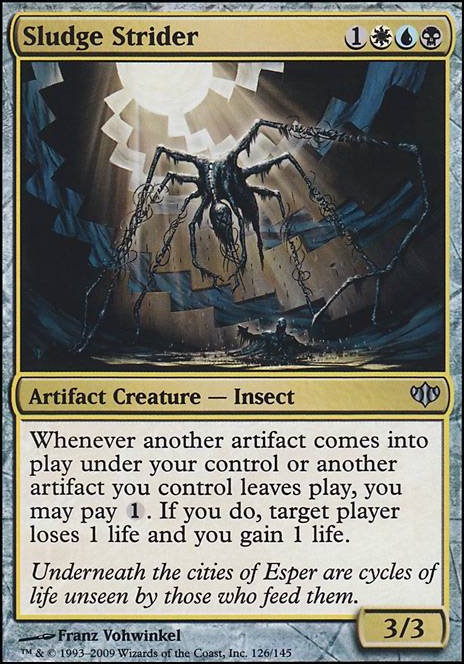 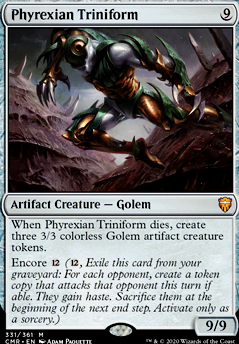 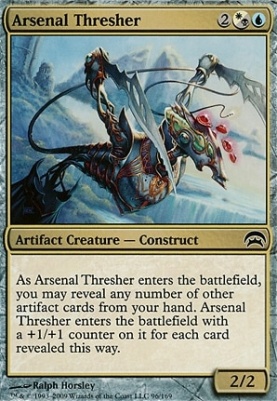 My COM died, but the way it was going, you were percived as the biggest thret and targeted early, you got screwed at 2 mana for the longest time (I think that was a fluke) then finally got the mana for Pentarch Ward to cancel out the Pacifism effects. Your creature was later destroyed by a Stormscape Battlemage , it looked like the game was going to go in Sludge Strider s favor after Stormscape Battlemage failed to get any creatures. I fail to remember what other deck there was.

Windwright Mage was only printed at common, would Scornful AEther-Lich, Sludge Strider, or Tower Gargoyle be acceptable replacements. Or does your playgroup not care if a commander is common or uncommon?

The Sludge Strider isn't legendary - it shouldn't be your Commander (unless your playgroup says so).

Here's a list from the Gatherer site for WUB Commanders

Hey all. I am thinking about making a Pauper EDH deck and am looking for any tips on deckbuilding, manabases, any advice on the subject in general, or recollections of experiences while playing Pauper EDH.

So I know that in Pauper EDH you use an Uncommon Creature as the "commander" with the rest of the deck following color identity and I think my friend said something about 30 starting life rather than 40. I apologize for my ignorance on the topic, I just decided off an impulse to try it out..

Okay so I have compiled a somewhat diverse list of Uncommon Creatures to use as the "commanders" in pEDH (Pauper EDH). I plan on making many pEDH decks to play with my friends and family. This also allows me to try my hand at many different lists and strategies and see what I like and dislike.

Shaman of the Pack: It should be a simple concept. Flood out as many Elf creatures then drop Shaman to chip off some decent life from an opponent.

Dryad Militant: I dont know if GY hate needs to be (or is) a thing in pEDH but using the Miltant sure hates on Instants and Sorcery slinger decks.

Diregraf Captain: Obviously the deck would become a Tribal Zombie deck, boarding up as many possible Zombies to apply pressure. The added bonus of life loss when his fellow Zombies die under his reign is a-oh-kay by me.

Inkfathom Witch: As much as I hate to see the (2UB: unblocked creatures become base P/T 4/1) on a Dimir colored card I will admit it has me wanting to try it even more. It would be tricky but its time to live the dream folks.

Izzet Guildmage: I think I am going to love this guy leading a Countermagic/Burn deck. It would definitely add some much needed diversity to the line up of decks I am going to build.

Spellheart Chimera: This would be a more proactive approach to the line ups Izzet deck, playing marginally more interactive games than Guildmage would. I like this route but as I have said before I can make both lists and try them out.

Ascended Lawmage: Upon doing research for pEDH info multiple forums constantly referenced to the Lawmage due to her Flying/Hexproof body. This type of "commander" is very well placed to lead a Voltron strategy, doling out mass amounts of pain with either a menagerie of Aura buffs or attached Equipment.

Kulrath Knight: I saw this guy and an avalanche of dirty tricks ran through my mind. Playing this guy leading a -1/-1 centric, Aggro style deck would be fun in my opinion. That and I am curious to see how he would interact with other decks that try to power through with creatures.

Tattermunge Maniac: The main attraction I had to this guy as the Gruul "commander" was he is a T1 play that must attack each turn. An obvious Aggro "commander", I would love to hear any opinions of other possible Gruul Uncommons to lead the deck as well.

Sludge Strider: This would basically end up as an Artifact filled Drain 'n Gain deck in one of my favorite color combinations. I find myself slightly excited to see what could happen with this build.

Fusion Elemental: Goodstuff with a splash of beautiful 8/8, nuff said..

These are all just first thoughts, still missing some color combinations. I DO NOT want to delve into mono colored "commanders" for pEDH unless the Uncommon creature is worth the loss of color options. Thanks in advance for any help

Edit: If anyone would like to collaborate on one or some of these decklists, we can get in touch over Facebook or over PM here on T/O

Mana Echoes and Sludge Strider would be a couple effective touches if you are sacking tokens and generating tokens efficiently enough.