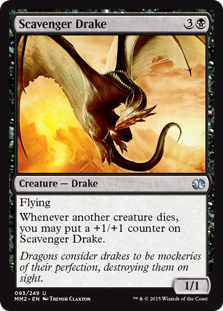 Whenever another creature is put into a graveyard from play, you may put a +1/+1 counter on Scavenger Drake.

Marchesa, The Black Rose
by Jeziebell 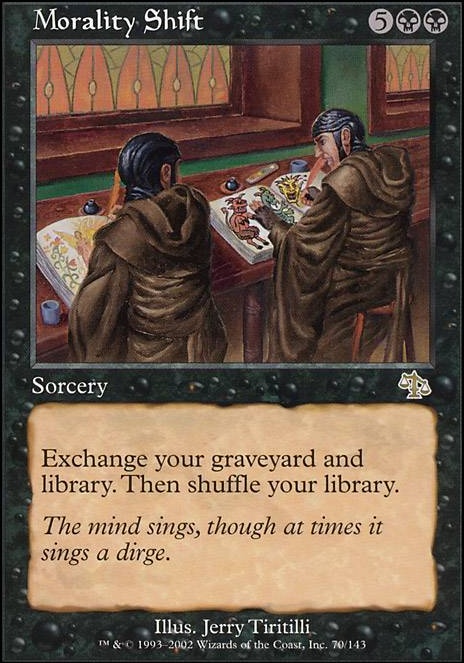 Well, there is Butcher of Malakir to be considered. Great for a $0.37 cent card. What you really need for the deck are sac outlets (Bloodthrone Vampire) and cards that benefit from creatures dieing. Like Scavenger Drake. Pawn of Ulamog helps out, too. Basically, you want to benefit from death (the aforementioned Doomed Dissenter) and punish opponents for deaths with cards like Selhoff Occultist or Rage Thrower). Thin out cards that don't care about either their own death or the death of others... Or bring other cards back from the graveyard, such as Whisper, Blood Liturgist

You could easily turn this into a Prossh, Skyraider of Kher deck.

I guess the game plan is use Reyhan to acumulate tokens in the battleflied and the put a bunch of them on Tana to create a lot of tokens to overcome your oponents. Tana rules are amazing, but she is trapped in a puny human body, you may want to add ways to make her unblockable Rogue's Passage is always good, I like a lot Key to the City.

Two good budget counters cards that come to my mind are Winding Constrictor and Path of Discovery. There are also many creatures that get counters when creatures dies like Lumberknot, Scavenger Drake or the low cost version that only cares about your creatures Rot Shambler these guys are great because they unify both themes of the deck.

Idk if anyone has mentioned this, but a growing number of cards are not loading their reversed side for the transform cards, and many cards are loading as generic black images with only the card name. Also, many cards (Especially the ones reprinted in Iconic Masters) are failing to load prices.

Here's a list of cards I have noticed problems with on the decks I have created.

So far that's all I have noticed, but I did notice that with these cards when I enter playtesting it often has issues. It won't truly "randomize" decks (You'll often topdeck the same card you just drew, or you'll shuffle all lands to the top / bottom).

I don't know if it's a coincidence but it's worth noting these are all black cards with the exception of Pious Evangel, who's a white creature but transforms into a black creature and it is the "Flip" side-text that won't load. That, and in playtest when you flip him over it reveals the generic back of the card, and not Wayward Disciple.

Have you considered replacing Mortician Beetle with Scavenger Drake? It does drop slower due to the three extra cost, but that just means 3 more thrulls, right? :D It also has flying and gains a counter when creatures die for any reason, as opposed to when they are sacrificed like the beetle.

Dictate of Erebos might also be worth considering over Grave Pact, as although they do the same thing, Dictate has Flash for one extra mana.

For enchantments and artifact removal, have you considered a Steel Hellkite? It's a six drop so it won't kill Endrek AND can remove both enchantments and artifacts if you can get it in. There is also the combo of Karn, Silver Golem and Spine of Ish Sah for the same purpose; Karn on his own allows you to use creature removal on any artifacts on the board for 1 colorless, but you can also animate the Spine after it drops, sac it, and repeat as needed. It can be expensive to do this, but with Ashnod's Altar and Endrek out you'll get at least one rep with just the four mana for the Karn drop.

I've tried to write an essay for the advice I have for this deck three times already. I'm on an old tablet that can't handle many things, so I've given up. I'm hoping you can guess my reasoning through card suggestion only.

Desecration Elemental, Hissing Iguanar, Jund Battlemage, Mogg War Marshal, Rot Shambler or Scavenger Drake, Claws of Gix, Bone Splinters, Curse of the Cabal or Grave Pact, Dragon Fodder, Fallen Ideal, Fists of Ironwood, and From Beyond UNLESS you decide to add an eldrazi with annihilator.

Playsets of Thoughtpicker Witch, Reassembling Skeleton, Rot Shambler if you chose it over the Drake, Act of Treason and possibly a functionally similar card which I forget the name of.

Xynarth - As to Rishkar's Expertise and Curse of the Cabal, both of these are already in the list. Beast Within may be a solid replacement for Vraska the Unseen. It's nice if I can hit more than one thing with Vraska, but otherwise Beast Within is better. Pox is very good, may end up finding a spot in here. Barter in Blood and Innocent Blood and other similar effects may be decent, but the list is a very tight ship and it's hard to know what to remove. I like having some of the targeted removal even though it doesn't synergize as well because with a sacrifice effect I am not usually going to hit what I want to. Mortician Beetle could be a solid include, I will definitely look into finding him a slot. Vulturous Zombie is less good because it doesn't do anything when I am sacrificing things without Grave Pact type effects. Scavenger Drake is hurt by the fact that it starts as a 1/1 for 4. Avatar of the Resolute does profit off of other things being bigger, but otherwise is just a big dude that does not then further the game plan, so I am not sure if he is good enough to find a spot. Kalonian Hydra, however, may also find a spot because doubling my counters could get absolutely ridiculous. Finally, we have Lumberknot which again is hurt by the fact that it is a 1/1 for 4. It does have hexproof, which is nice, but more often than not I am afraid of boardwipes which hexproof does not stop. Some sweet cards to think about though, I will definitely see if any of them deserve a spot in here. Thanks for the feedback, and if you do make that Mazirek list post it and I'd be happy to take a look at it.

More suggestions for you!

Depending on how big your monsters get, you should run Rishkar's Expertise and Soul's Majesty. Even if they only get to 5 power, you're looking at basically a new hand. I'd also think about running Animation Module. More and more, I'm realising how potentially ridiculous that card can be. Just food for thought.

I also find you're kind of light on removal. Instead of Vraska, since you say you're using her for her removal, get the cheaper Beast Within. Instant speed, removes anything you want/need.

In terms of synergy, I'm particularly fond of both Barter in Blood, Innocent Blood, Pox, Smallpox, Geth's Verdict, Diabolic Edict, Dead Drop, To the Slaughter, Warren Weirding (creates fodder for you if you decide to sac one of your own creatures, particularly powerful if played with Dictate or Grave Pact), Chainer's Edict.

Curse of the Cabal is probably my main recommendation in this massive thing I'm sending you. It's a non-removable sac outlet and you're basically guaranteed to have someone sac something since if it becomes unsuspended it's brutal. Also, late game, you can just cast it and kill someone (unless it's countered, so just be careful haha)

If you're looking for beefy creatures too, you should consider: Mortician Beetle, Bloodbriar. Vulturous Zombie, Scavenger Drake, Gavony Unhallowed, Avatar of the Resolute, Kalonian Hydra and Lumberknot.

Anyways... sorry for such a massive list. I've honestly thought of building Mazirek myself, hence the mess u_u