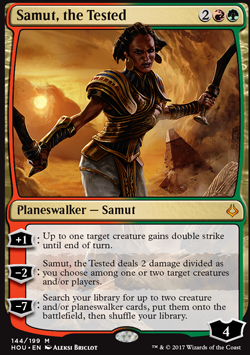 +1: Up to one target creature gains Double Strike until end of turn.

-2: Samut, the Tested deals 2 damage divided as you choose among one or two target creatures and/or players.

-7: Search your library for up to two planeswalker and/or creature cards, put them onto the battlefield, then shuffle your library.

Well, I guess this wants to be combined with Samut, the Tested ?

It's a deck that will propably play at least some fat demons, so Samut's ultimate seems pretty incredible with it.

Even from Amonkhet, which is basically the size of the Nile delta, you have Basri Ket and Samut, the Tested . Unless the city of Naktamun has two hundred billion people (it looks like it has maybe twenty thousand at the outside), that's virtually impossible.

Added Mage Slayer as it has a triggered ability after doubling dragons power with xenagos it can be a nice combo.
Took out Dragon Tempest for it, have other means to get haste, although the other ability is nice but in comparison to other cards feels weaker..

Might be a good idea to include one of this planeswalkers:
Domri Rade
Arlinn Kord Â Flip
Samut, the Tested
but not sure what to take out for any of them.. they for sure have a good synergy with the deck but have no idea atm what to exclude...

Huatli, Warrior Poet is actually not the best Dino planeswalker available. If you have the choice, Samut, the Tested is way better.

seshiro_of_the_orochi on What are some under-rated or â¦

I tend to playnot so many Walters. But one I really like for dinosaur strategies is Samut, the Tested. If you can protect her, the +1 can win games if you have at least one Big attacker. The -2 is great value with Enrage triggers. And if you ever get to the ultimate, you might find that Tooth and Nail becomes better when it can go for walkers, as well.

Sultai_Sir on What's the Worst Trade You â¦

Some people are obsessed with Magic, and not in a friendly, favorite-hobby type of way. Some people are in it to get more cards, more value, and don't care how they do it. Now, imagine 10-year old me. I had just pulled a Doubling Season, and a guy had seen me do it. Now, I didn't know it was worth 50 dollars at the time, all I knew was that he was offering me a sweet deal for it: Samut, the Tested. It was a planeswalker! How could I refuse? Well, cut to me going back to my house, and checking how much it was worth. Here's a hint: less then 2 bucks. Doubling Season is a 50+ dollar card. So anyways, what are your worst trades?

Berserkers' Onslaught and Grenzo, Havoc Raiser interact well since every creature you control who does combat damage to a player could potentially trigger Grenzo twice.