When Rona, Disciple of Gix enters the battlefield, you may exile target historic card from your graveyard. (Artifacts, legendaries, and Sagas are historic.)

You may cast nonland cards exiled with Rona.

, : Exile the top card of your library. Rona, Disciple of Gix
by Pandamonium_II 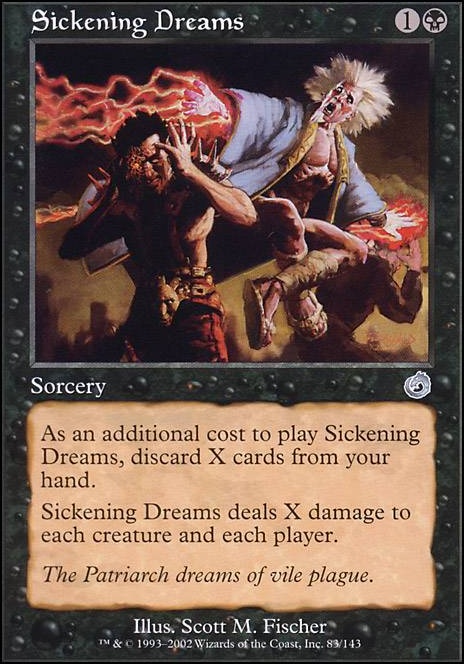 also i forgot to mention but the reason i made Gix do the exiling thing is because of Rona, Disciple of Gix

I messed around with a Rona, Disciple of Gix deck based on artifact sac recently. Had quite a few cards in common with this build like Mirrodin Besieged , Marionette Master , etc. It never saw actual play, but in my playtesting, it was surprisingly complex and seemed like it had potential. Sadly, Rona herself isn't the greatest and I scrapped it.

I love the red splash here. Maybe that's what that deck was missing. This deck looks pretty good!

I don't remember it, but idk? There's a very real chance I've personally done it before, lol.

Based on Rona, Disciple of Gix:

So this exiles all cards in hand, play, and the graveyard. It takes all cards not exiled this way and puts them into play

Anybody still interested? Maybe the Yidris CHAOS deck is not CHAOS enough, & should be more Library Manipulation as the overall theme? Is my Omnath Anti-Conformity from deck worth it, or not? Is Sevinne's approach to Flashback, Mass Burn Wrath, & protection not good enough? If so, why? & what would you build Rona, Disciple of Gix around as a CMDR?

This is important as I just wanted not just advice, but also constructive criticism.

Please link all cards in your question using double brackets so that people know what cards do.

Rona, Disciple of Gix has what are known as "linked abilities". The cards you are allowed to play via the second ability are only the cards exiled by the first. You will not be able to cast cards that you exiled via The Mimeoplasm 's ability to your Rona copy's second ability.

What Ends There Shall Once More Begin

First of all, great list! I have been thinking about building around this commander myself for quite some time now as I found this list on Reddit. You were asking for critique/suggestions so here we go:

The new land Field of the Dead seems like a great utility land for this deck, essentially turning all your infinite mana combos also into infinite creatures. It also seems like a solid target to blink for value.

Animate Dead but neither Dance of the Dead nor Necromancy ? If you don't want that many recurion spells I personally would opt to run Necromancy . It costs 1 mana more than Animate Dead , but it can be played at instant speed, if needed.

I know, it's a bit boring, but how about Rhystic Study ? Also maybe Smothering Tithe ?

Propaganda but no Ghostly Prison ?

Ashiok, Nightmare Weaver seems way less optimal than the new Ashiok . He also can infinitely mill your opponents, while providing graveyard hate instead of a mediocre creature steal ability.

Dark Confidant is a great card overall, but I wonder why he is in this deck specifically. He is the only creature in the deck that has no synergy with flickering.

Rona, Disciple of Gix seems very inefficient to me.

I get that you only play the Singets and Talismans that make blue mana, but the deck has only very few ramp pieces (I count 7), so I think Orzhov Signet and Talisman of Hierarchy would be great inclusions. Also have you considered cards like Mana Vault ?

No Path to Exile ?

Disenchant seems out of place. I would replace it with something like Leonin Relic-Warder .

Eerie Interlude but no Ghostway ?

You should definitely play Glen Elendra Archmage instead of Negate .

I know it's pricy, but have you considered Vampiric Tutor (or even more extreme: Imperial Seal )?

This deck is quite boardwipe light for a more control oriented strategy that can, on top of it, save some of it's creatures by temorarily exiling them. Terminus seems especially great, other than that just the classics: Wrath of God , Day of Judgment , Damnation .

These are all my thoughts on the deck, I hope there was something in there that is useful to you ;)