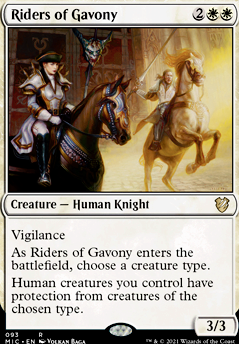 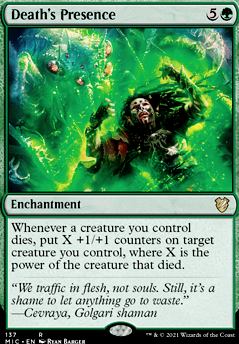 Hello I noticed that you have tribal hate as well, since hate is in this list as well I can show five more in the hate category in any tribe that I don't see in this list.

I love this deck! Itâs always nice to see a Knight tribal deck. Since most of your knights seem to be human, might I suggest Riders of Gavony?

I agree, it was a quick, attention-grabbing, lazy option for WOTC to take with these cards. But do we really need more? Honestly curious if there are constructive ideas besides the ban for those who find it that distasteful.

Would anyone play a functional reprint of Imprison? It would probably color-shifted into white or maybe blue, at which point the card pretty much exists already. What does a functional reprint of Invoke Prejudice even look like? Ice Cave, Erayo's Essence, and Decree of Silence are as close as I can see them printing. They already functionally reprinted Crusade as Honor of the Pure, and they don't print such wide-ranging color hosers as Jihad and Cleanse any more. I could see Jihad is a color-specific Riders of Gavony-type card. The two creatures don't even bear mentioning.

This works fine in digital, but it's the paper copies that are the challenge. Someone playing the game isn't going to take time out to Gatherer search a card to see that WOTC doesn't approve. Putting an errata online doesn't do much for cards on a table, especially when it's the art or the card name that's the problem. The flavor is the problem. Not all parts of the history of the game need to be kept for posterity like they're a winning pro-tour play or something as ubiquitous or historic as Lightning Bolt or Black Lotus. Maybe some can be sacrificed for the Greater Good.

Not a great look, but at least (and most important for the company) it costs minimal resources.

One further comment...perhaps 28 decks out of the whole database is a statistically insignificant number, BUT we're comparing decks that run Cleanse for racist connotations to the ones that don't. At that point we're asking 'how much racism is too much?' Are we setting the racism tolerance at 15% or less? 10%? Is only 10% racist better than 26% racist?

Hmmm, I do like Skyhunter, double strike is no joke. TBH Elesh Norn, Grand Cenobite is probably on the cutting block, maybe replace her and Riders of Gavony with a couple skyhunters or Kinsbaile Cavalier

Thing is Elesh Norn had a very memorable couple of games over the years where it's been quite the game-ender when I was at like 1 life. Clearly a sentimental 1-of.

Similarly, I do think path is probably better the plowshares, especially with the white orchid knight in the main.

You should see how many of the samurai in your next iteration are human and if it is large enough maybe work some human payoffs to help bolster your deck like Riders of Gavony, Thalia's Lieutenant and Cavalry Pegasus (there are several more). Note that you shouldn't add so many to dilute your Samurai core and if you have a good number of fox and other samurai this may not be something worth pursuing.

This is going to be a combat centric deck, so you may find adding combat related cards and some goad cards like Bloodthirsty Blade and Martial Impetus to help do damage and remove blockers for your turn

If you want to start to lift the budget cap: Flawless Maneuver and Heirloom Blade will be cool in this deck