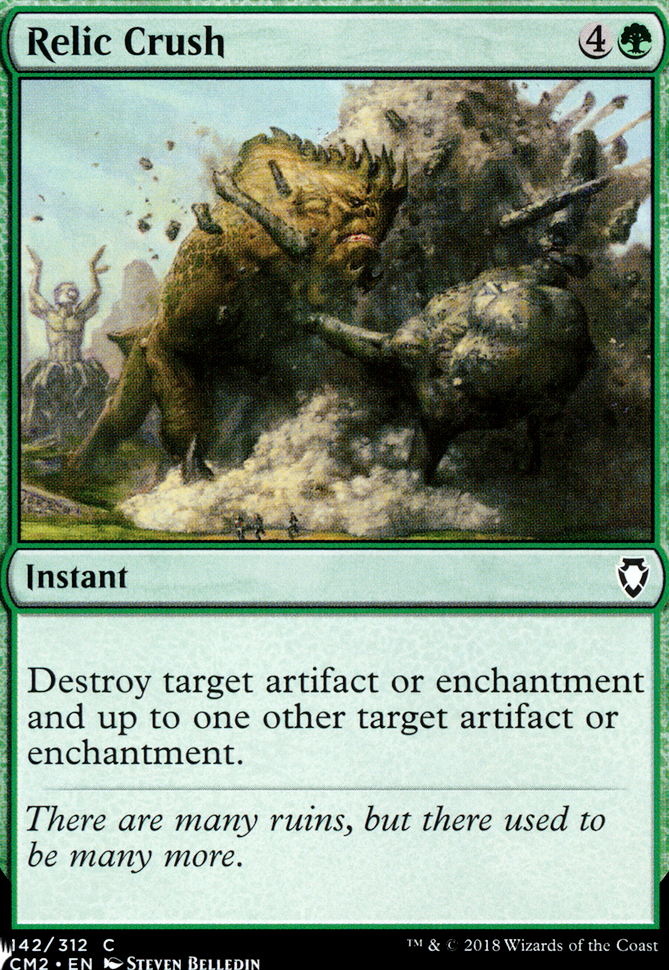 Relic Crush occurrence in decks from the last year

Force of Vigor would definitely be a good addition, and I think I went with Relic Crush over Krosan Grip for the multi-target (or to save $3). This deck hasn't been actively updated in a couple years (I think I added Anointed Procession to the maybeboard).

You may want to consider enchantments with mana doubling effects such as Zendikar Resurgent , Mirari's Wake . I also think hexproof creatures work best with an aura theme like Slippery Bogle , Silhana Ledgewalker , Sagu Mauler . Asceticism and Sterling Grove are also amazing for this deck. I would add more destruction like Crush Contraband or Return to Dust even Relic Crush . Reclamation Sage , Indrik Stomphowler , Acidic Slime . Maybe even Seal of Cleansing

Instead of Relic Crush you could use Return to Dust, does almost the same thing if it's on your turn, but maybe it's just me that prefers to exile something rather than to destroy something.

You could put an Adorned Pouncer or an Ajani's Pridemate insted of an Initiate's Companion.With the equipment sub-theme you could use a Leonin Abunas just for shit and giggles. Also, kind of situational, but Shamanic Revelation is usually better than Harmonize (Or use both).

Swords to Plowshares is never a bad option.

All of those cards are not that expensive and are really good, I guess.