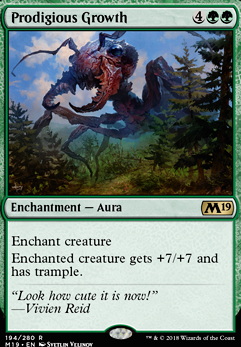 Enchanted creature gets +7/+7 and has trample.

TheCaptainsLog Just now seeing your comment - sorry for the late response. You could absolutely add things to make Thrun unblockable and it would likely do very well. The problem I run into a lot is that these cards don't have any other upside to them. I like having cards that do multiple things for me, whether that's just making Thrun larger or giving him vigilance on top of trample/some kind of evasion. Trample is easy to find in green - Trailblazer's Boots is nice and fairly cheap. You could definitely get away with putting in Prowler's Helm and Rogue's Passage (I'd probably take out Prodigious Growth for the helm).

That said, Whispersilk Cloak would be a bad choice here because we don't want Thrun to have shroud. Shroud means we can't equip or enchant him with anything without moving the cloak to another creature(and this deck won't often have another creature to equip to). I'm also not a big fan of Manifold Key, as its untap effect is wasted in this deck. If I were to suggest a similar card that I think would do better, it would be Key to the City

Hope this was helpful, feel free to ask any other questions about the deck and I'll respond asap.