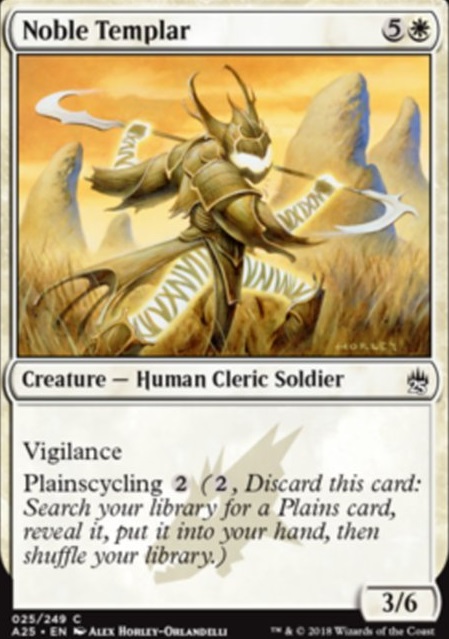 Plainscycling (, Discard this card: Search your library for a Plains card, reveal it, and put it into your hand. Then shuffle your library.)

Technically Noble Templar isn't ramp either, as it puts the land to hand. They accomplish the same goal, which is to have a land drop on your turn, but Verge Rangers will do it more than once (at about a 1/3 ratio), it's top deck control, it is, as mentioned, a good play into sensei's divining top, and has a body/ability/cmc that can't really be disregarded in comparison to templar. What's more is that you can have both the body and the abilities whereas you can't with Templar.

My issue with Verge Rangers is the "an opponent controls more lands than you" restriction. Unlike the cards in this deck with that restriction, Verge Rangers isn't ramp or a land tutor. Knight of the White Orchid and Weathered Wayfarer actively get me out of land screw. Rangers barely makes an effort.

Well, someone made a point in a discord that I'm in about Verge Rangers. It's less about mana ramp, and more about playing lands off the top so that you are more likely to have a card on top that you want. Kinda sorta card advantage I guess. Now whether I would include it over Knight of the White Orchid, or even Noble Templar, I'm not sure. I honestly might try it over the knight in my deck, as it's repeatable, it's top-deck control, and it doesn't care if the card is a plains or not.

I also don't have Noble Templar in my deck, so I can't say much about switching it for that.

But yes, Cartographer's Hawk is bad.

Two Commanders in One

If Eternal Dragon and Noble Templar are there for cycling, you could also include Ash Barrens and Gleam of Resistance

December 11th
We cracked a bunch of really interesting cards today. Scourge had a bunch of "CMC matters" spells (e.g., we got a Dragon Shadow), so our Scornful Egotist -- which on first look was perhaps the most overcosted 1/1 we'd ever seen -- actually made sense.

Other fun cards were Treetop Scout (a non-flying flyer?!?), and a couple from the, er, cycling cycle: Noble Templar and Shoreline Ranger.

Scourge also introduced the Storm mechanic, which made Hindering Touch our top pick at common. Reward the Faithful at uncommon was better though. But Pick 1 went to our rare:

I mean, it's not buh-roken or anything, but there are some tokens decks in this house that want this card :-)