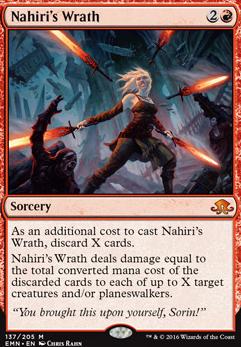 Nahiri's Wrath deals damage equal to the total converted mana cost of the discarded cards to each of up to X target creatures and/or planeswalkers.

Woe, plague be upon ye
by buoyantVocalist 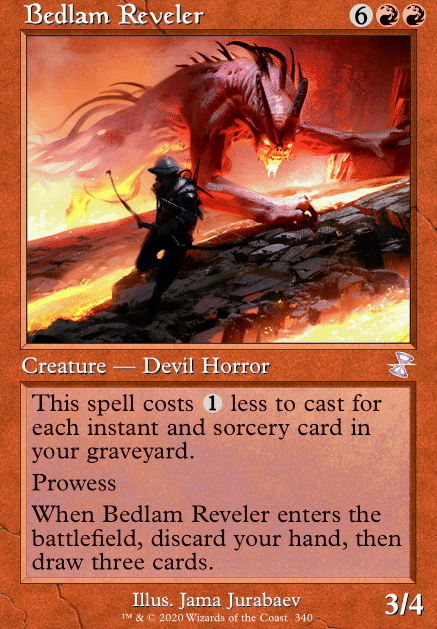 Silence in the Library
by OrsinsFang

Rielle, the Everwise - Drawing and Wheeling
by Altartikus 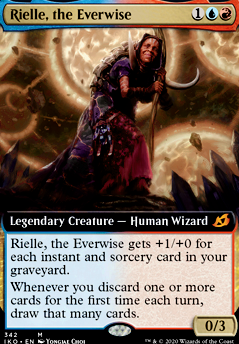 Chamber of Manipulation and cards like it. You should almost always have something worth playing from your opponents and your cards can become discard fodder. Spellbound Dragon and Nahiri's Wrath .

Thanks. I believe Ignorant Bliss is the weakest link here so I replaced them with Nahiri's Wrath . Thereâs a few ways to draw/tutor in the deck so IB got the axe.

I made a similar deck on here a while back, I also used Nahiri's Wrath as extra copies of carnage.

This looks quite nice. Lots of synergy and powerful plays you can make. Iâd increase the number of Nahiri's Wrath, personally. Itâll be difficult enough to hold everything off until you can play Scrap Mastery and go off, so the more time you could buy the better.

MindAblaze: It's really just too slow needing delirium to work properly. It's bad when you don't have it and when you do have it (really unlikley to ever have delirium in a deck with enough hits for cocon I might add) your opponent is unlikley to have hand. I stand by Smallpox as far as that sort of effect goes, much more devestating at every stage of the game and stacks better in multiples even if it hurts you.

seshiro_of_the_orochi I'm not seing how Nahiri's Wrath could finish your oppoenent off. Were you thinking it could hit opponents or is there something I'm missing? Sanity Grinding is really bad in any deck, but in a deck that is (at least, but probably more than) 2 colors and dosen't have mill as a main plan, it won't ever preform well.

I'm curious, why Contingency Plan? It's very mediocre unless your deck needs some weird combination of miracles + graveyard shenanagins. I would never want to see it on a cocon hit and wasting 2 mana and a card to make sure I hit something with cocon sounds like a losing proposition. Wouldn't it be better to just play good sorcery hits (that maybe interact with your opponent) rather than this?

I think I might just have found some perfect cards for CoCo Jr.:

Nahiri's Wrath might be the best finisher option you have. And to draw enough cards to have it do lots of damage, See the Truth seems like made for this. We might be on to something here...

Another possibly impactful card: Sanity Grinding. And for more value: Shreds of Sanity and Flood of Recollection. Also, there is a second Contingency Plan: Taigam's Scheming.