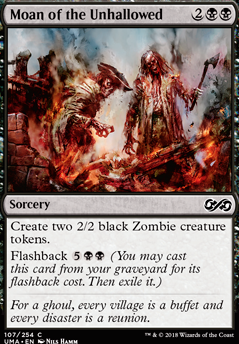 Moan of the Unhallowed

Moan of the Unhallowed Discussion

Sometimes They Come Back | The Scarab God

The frame work here seems to be mystical teachings, pieces of the puxzle, counterspell, ash barrens and transmute cards. I'm thinking this deck could make use of Persistent Petitioners and maybe some infinite combo bounce/mana or perhaps just Moan of the Unhallowed , or hell it's a big deck perhaps both

SynergyBuild Im going to try Moan of the Unhallowed here: A Bigger, Blacker D*ck. With Dark ritual it's a turn 2 play...very good value in Pauper. As far as it being a competitive deck...I don't know.

From the above list, the cool cards not mentioned are:

Reckless Wurm - very cool change that can push madenss decks.
Moan of the Unhallowed - a key pieces for a zombie deck.
Canker Abomination - I do not which deck will play it, but it is a cool card nontheless.