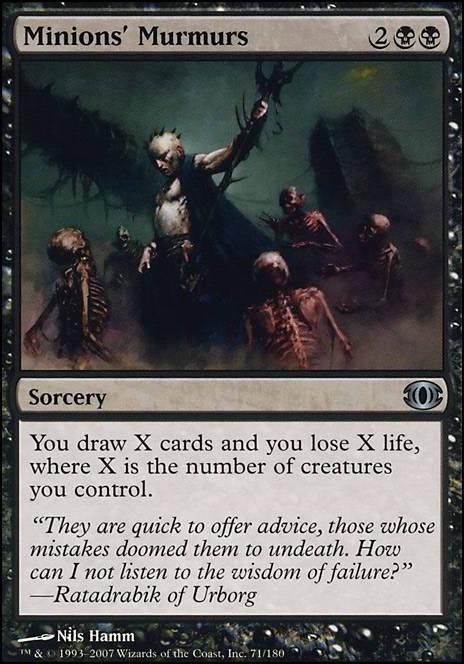 You draw X cards and you lose X life, where X is the number of creatures you control.

What We Do In The Shadows - Budget Vampire Tribal
by YetiritterTom 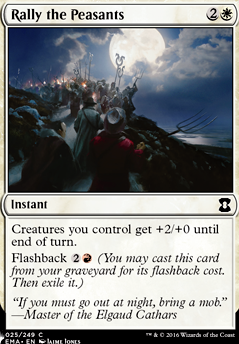 99 problems but Edgar ain't one (Edgar-EDH)

Hi, today I thought about some changes that would make your deck faster.

That's my 2 cents, let me know what you think about these changes!

cdkime good eye on the druid; I didn't do the math on that. At 3 it's more comparable to a Far Wanderings with threshold, which on turn 2 is downright abusive. As for the blue one, remember it's draw+discard so copare to a Merfolk Looter which is perpetual, I don't think 5 is too high.

As for the green card drawing, to be sure all colors 'ought' to have card drawing. That blue has grown to have a de facto monopoly on card-drawing is a travesty IMHO; not only does it give the color pie imbalance but it also doesn't make sense flavor-wise. Black gets card drawing because it trades anything for power a la Necropotence , Dark Confidant , Minions' Murmurs and the like. Red being the color of power, chaos, and resources has its own mechanics like Wheel of Fortune and Browbeat . White 'ought' to have its own if it reflects the idea of patience being rewarded with blessing or soemthing to that effect. Green has traditionally had its own in cards like Natural Selection , Sylvan Library , Wall of Blossoms , Recycle , Ohran Viper and even Harmonize . The idea being the abundance of resources, renewal, refreshing, and regrowth. It does fit. As for the farmer, I patterned him after Merfolk Looter but I do see your point about the shuffling. Perhaps bottom of library instead.

I forgot about Imperiosaur . It's been a while.

Yes, I agree with you Gleeful Pyre is a terrible way to showcase the design mechanic.

The issue with the book, now that I think about it, is that thi scard doesn't reflect what the thing actually does, from a flavor perspective. The Book of Knowledge was held in the City of Hoffu after the great uprising in which the demon Onawantue was imprisoned and mortals won their freedom. Shortly thereafter, it became lost and at the same time, the Guild grew seemingly out of nowhere. The way it works is that when you read a page, you gain knowledge but you also imprint a page of knowledge onto it, so that anyone who reads the book after you can gain your knowledge. The Guild initially consisted of the Guildmaster and the six Guild Wizards. But they shared the book among themselves and in so doing grew extremely powerful. Too powrerful for the Guildmaster to control and so he sparked division among them that tore the region apart. The most powerful of them all was Meekay (, but he was also profoundly schizophrenic. Meekay had discovered the Guildmaster's plan: to use the Book of Knowledge to gain the key to unlocking Onawantue, the evil nasty demon that he secretly served so that she could re-enslave the mortal world. And so, the Guildmaster destroyed Meekay's thought receptacle which had previously allowed him to function more or less normally.

Centuries later, the original six became known as gods: Raojan the god of Fire, Norina the goddess of deception, you get the idea. The Guildmaster still needed minions to carry out his whims, but instead of talented mages he chose common folk with a propensity to greed and kept their knowledge on a tight leash---allowing them just enough knowledge to spark but not enough to challenge his control.

Boza if the requirement is that the card will eventually see print else don't bother why do we even have this forum? Is this a secret wotc R&D lab that I don't know about? The point is as with anything else with this game: to entertain and have fun.

As for being unreceptive to criticism, please understand that I thank all of you for your feedback. Thank you. Sincerely. If I come across as aggressive that's because I'm an asshole in general and I'm too old to apologize for that.

Great to see your still updating this list once in a while!

I personally don't like single target discard in multiplayer formats. It can hit only one of 3 players so youâre never going to hit all the mass removal that you want. Also picking the right player at the right moment is hard. Mind Slash might hit all the cards you need, but sacrificing half the board in order to get rid of all the mass removal doesn't feel like a solid plan (and the amount of black mana this card requires is just irritating). I think I just accepted that mass removal is going to be annoying and figured the best way to deal with it is just more card draw!

Also Torment of Hailfire without any ramp wouldnât be my favorite choice. Might as well play a Price of Progress if youâre looking for a finisher ;)

Found two new cards for you to consider:

Scapegoat requires only 1 mana to sort of save you board. Way easier to keep up one white then three mana! Also when you have nothing to do you can bounce some creatures to get you some more tokens!

Minions' Murmurs = Champion of Dusk without the body for one mana less.

I must admid I just orded them and have yet to try them out though.

Also I thought you were running Adanto Vanguard because of mass removal or am I mistaken?

Love to hear your thoughts on this!

Thanks for the suggestion Scion_of_Darkness, that is an amazing card! This deck should win by turn 4 or 5, but if not Marrow-Gnawer will double the number of rats you control to ensure victory. I am going with 1 instead of 2 because this deck is budget and that card is pricey. As for rewsifer, I think 20 swamps is as low as I will go for this deck. Throne of the God-Pharaoh might help, but I don't find it necessary. I will add it to the maybeboard in case anyone prefers it over another card in this deck. I believe Dark Tutelage is a better card than Sign in Blood for card draw, but thanks for showing me the flaws in Minions' Murmurs! :)

I love this deck
personally, I would:
- Remove 3x Swamps
- Add 3x Throne of the God-Pharaoh
- Replace the Minions' Murmurs with Sign in Blood since board wipe equals zero card draw.