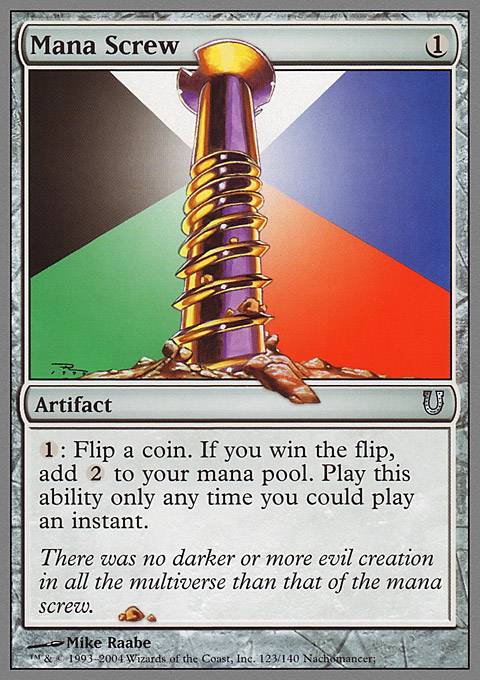 (1): Flip a coin. If you win the flip, add (2) to your mana pool. Play this ability only any time you could play an instant.

Joke's On YOU
by WolvenWheeler 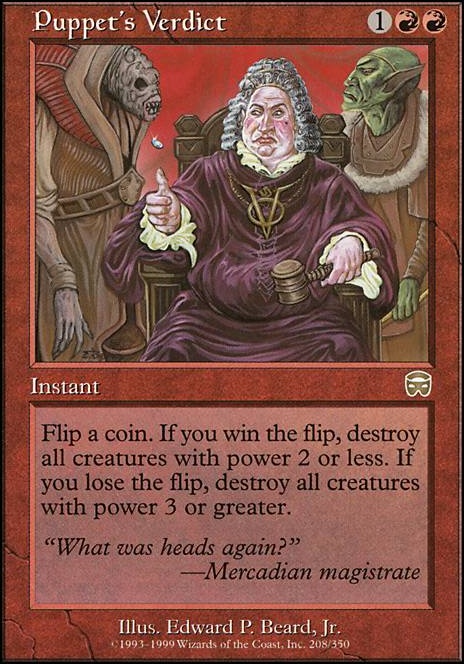 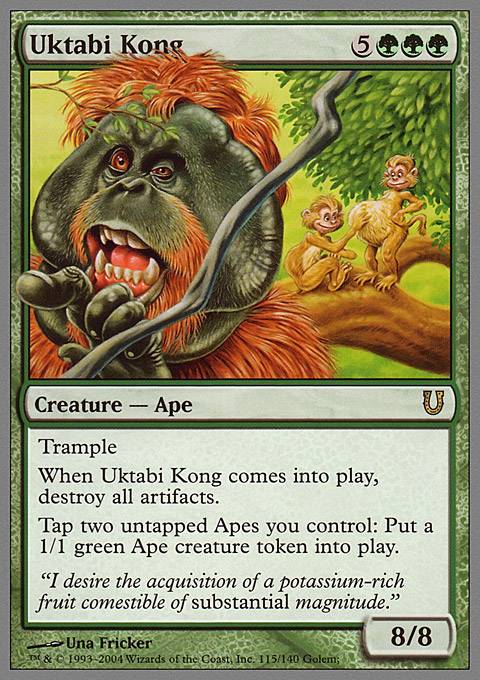 A sock of quarters

I like the direction you took this deck! The un-cards bring up the power level a crazy amount since with normal odds you'd theoretically be able to go infinite with Mana Screw and the Everythingamajig. I probably wouldn't be able to run them though since people would start getting upset with me using non-legal cards lol

If you're playgroup lets you throw in a few silver boarder cards then check out A sock of quarters. I win a surprising number of games with it. Especially the Mana Screw and Karplusan Minotaur combo. They haven't put it together that they can kill the creature and I don't plan on pointing it out.

InfuriatedBrute Bloodlust Inciter would be worse in this deck as it can not give anything haste the turn I play it, and it doesn't give me the option to pseudo-cycle. I also wouldn't want to run deserts, because while they give me the opportunity to have some extra utility, they can also Mana Screw me.

This deck satisfies my sadistic urge to Mana Screw my opponent. I love it +1

I made a deck similar to this, only mono red with less time spent on it. Mirror Gallery works wonders with Krark's Thumb. It doesn't take much to essentially guarentee that your flip will be what you want. After that it only takes one Game of Chaos to win and if you don't draw one Chance Encounter has you covered, especially if Karplusan Minotaur is out.

Let's get real though... Mana Screw.

aeonstoremyliver on what is mana curve?

For example, I play Burn/RDW in Modern and Legacy, where my curve tops out with very few 3 CMC spells, so I play 19 lands. I play Abzan in Legacy where my curve is 3-5 CMC ish, so my land count is 22. In Modern, Abzan is 23 lands. Mono

12 Post in Legacy is 26. Mana dorks and accelerators such as Birds of Paradise, Noble Hierarch, Deathrite Shaman, Mox Opal, Mox Diamond, Lotus Petal, Simian Spirit Guide, etc. can reduce your overall land count, as they can 'count' as mana sources.

You should also pay attention to the amount of colored producing lands you have in your deck vs the colored spells in your deck, if playing more than one color. For example:

Now, there may be some colorless lands like Kessig Wolf Run, Ghost Quarter, etc. that shouldn't exceed greater than 4 in number. With that, it's obvious that we can't have 25+ lands in this deck, so we note that red had more than green and needs more sources. So the mana base would look like such:

To be Mana Screwed is the worst thing ever, as your mana base is THE most important piece of the game. Hence why ABUR duals are so expensive. Being on the Reserve List also helps, but I digress. Mana curve and mana base are essential components to designing an efficient deck. Consistency is another. Epoch has some articles on his page that I suggest you take a gander at that delve deep into the subject of deck building.

@LVL_666 & Didgeridooda i have updated the land base but im sure i missed a few things i cut Imperial Seal, Mana Screw and added in some new stuff but now im short 14 cards what should i add? thanks for your comments

So what exactly is your wincon with this deck? I might be misinterpreting the name of your deck, but it appears that it can win on turn 1. But the combo you have listed doesn't seem to work that way.

I don't mean to echo previous comments, but you definitely do need to work on your land base. To be honest, it's the most important part of your deck outside of your win cons. Since you're all about speed, have a ridiculous budget, and are going for

, why don't you consider the Onslaught/Khans block Fetchlands? Verdant Catacombs, Misty Rainforest, and Polluted Delta are the ones for you. Since you are pursuing the original dual lands, you can tutor for them using the previously mentioned cards. I see that you intend on acquiring Gaea's Cradle. Honestly, I don't think that is the card for you because your deck doesn't contain many creatures. Unfortunately, you won't be able to take full advantage of the card.

Gleemax and Mana Screw...I wouldn't allow you to play either of those cards if we were playing together. Just sayin'. Those are unhinged cards for a darn good reason. The closest substitute for Gleemax I can think of is Curse of Echoes, which has a somewhat similar effect...but obviously on not such a broken level. You already have Mana Crypt, so the next best thing to sub out for Mana Screw would be maybe Simic Signet...as you seem to have all the better rocks already in the deck.