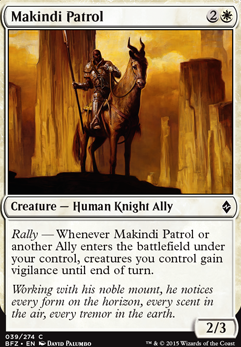 Rally â Whenever Makindi Patrol or another Ally enters the battlefield under your control, creatures you control gain vigilance until end of turn

We Are Stronger Together, Brother

This deck has an awesome mana curve. lol literally cannot brick. Seems aggressive enough that it shouldn't have to worry about late game, though some removal options might be useful. If i was to make any recommendations, I could see tightening it down to just two color so you could drop City of Brass (and the price). Maybe replacing Shapeshifter and Battlesinger for something like Drana, Liberator of Malakir , Makindi Patrol , and a 4th Champion of the Parish . Bala Ged Thief could be really good in this deck, but admittedly high on you curve. Really cool deck though, +1 for sure.

First, this deck isn't standar legal, maybe mark it as modern or casual so it will fi into it's hubs better. Looks pretty good though! Maybe swap out Makindi Patrol for something like Kabira Evangel for more game impact, or fit in Halimar Excavator to mill to death

Kor Bladewhirl replace Thraben, 1 or 2 more Gideon, Ally of Zendikar SB, Outnumber SB 2 or 3 depending on meta, Quarantine Field 1 or 2 in SB, Makindi Patrol would be useful as a 2-4 of. since you have equipments, Stone Haven Outfitter would be useful, maybe replace Thalia's Lieutenant or Weapons Trainer. Stoneforge Acolyte would help get to your equipments. Resolute Blademaster and Angelic Captain could be useful 1 of's, either SB or MB, as they're powerhouses in their own right. Munda, Ambush Leader help you find the allies you need late game. You can easily turn this into 1 way or the other: Ally based or Equipment based, it's really up to your play style.

I prefer Makindi Patrol because he's a body that triggers other rally effects and doesn't cost double white. Vigilance isn't totally necessary here, as most of your damage to your opponents come from lifedrain. Also, Drana, Liberator of Malakir gives attacking creatures +1/+1 counters permanently, even if she leaves the battlefield.

I think you're missing a pretty important combo with Zada, Hedron Grinder along with Mighty Leap and Brute Strength. Turn 4 drop Zada, turn five, Expedition Envoy and the two pump spells. And viola, army of flying tramplers. Chasm Guide costs too much just to give creatures haste. Switch them out for a playset of Firemantle Mage or two Ondu Champion. You should also switch out Resolute Blademaster for Angelic Captain. Lantern Scout and Hero of Goma Fada aren't doing much in this deck. Switch them out for a playset of Makindi Patrol. I'm going to link my B/W Lifedrain deck, as you seem to have most of the pieces for that as well.

I just want to thank you so so much for commenting b4nchs, you have some really good suggestions. My main finisher for this deck is to bring out Chasm Guide then next turn an Angelic Captain or Resolute Blademaster so that my entire force of allies can swing in for double strike or a huge flyer hopefully with lifelink by Lantern Scout but granted it doesn't work if the opponent has targeted removal. Weapons Trainer I can work into the deck to lower the curve and more net more aggression, but Stitcher's Graft seems a little too risky to run without having x4 copies of Makindi Patrol which I'm not sure I want to run.

I honestly stared at Reckless Bushwhacker and Chasm Guide for the longest time, and I think the latter would be better so that turn 5 there's a possibility my 5 CMC's can swing in the turn they come out, but I really like the idea and will probably tinker with it in the future.

I feel like Bone Saw is a little too underwhelming when compared to something like Stoneforge Masterwork, but still, love the suggestion.

Aerial Responder is wonderful! I will definitely playtest with him to see if it would work better than something else in the deck.

Sorry for wall of text, but once again, thank you for all the suggestions!

Weapons Trainer is really good here. Also Stitcher's Graft has synergy with Makindi Patrol to help get around the untap effect so maybe adding more copies of it if your decide to run that equipment. The builds seems nice but I would go with a lower curve to get early aggression in the game so equips and Ally creatures can finish it out. Have you tried Reckless Bushwhacker and Bone Saw? One last thing would be to add some space for Aerial Responder. I know it seems out of place but he is a REALLY nice card and for his mana cost it could create a wall that forces your opponent to have to deal with