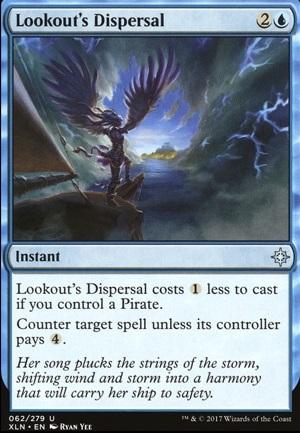 Lookout's Decision costs 1 less to cast if you control a Pirate. 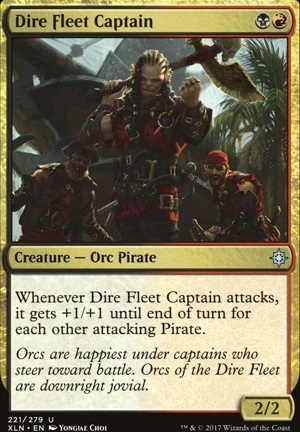 Scourge of the Seas
by Tinnuki

Marchiali on Help me create a pirate â¦

Ok then. Instead of Lookout's Dispersal you could add Sinister Sabotage. Moment of Craving could go mainboard instead of Dive Down.

@andriygoblin Thank you for the suggestions! Its about time I made some changes to the list.

After some testing it seems that Notion Rain and Thief of Sanity are too slow. I do think that the deck needs some way to generate card advantage after you dump your hand on the board. For now i will change Notion Rain for Curious Obsession. Curious Obsession seems like an overall better card for this deck. It's cheap, provides card advantage and pressures your opponent at the same time.

Dive Down is definitely a good card to consider. However, in the games I played board wipes were a much bigger threat than targeted removal. Kitesail Freebooter, Siren Stormtamer and Thought Erasure do a good job at keeping Lightning Strike and Assassin's Trophy at bay. For now I will put Dive Down in the sideboard and try out mainboard Lookout's Dispersal/Syncopate.

While Doom Whisperer is definitely a powerful card, I think its simply too slow for most matchups to justify putting it in the mainboard.