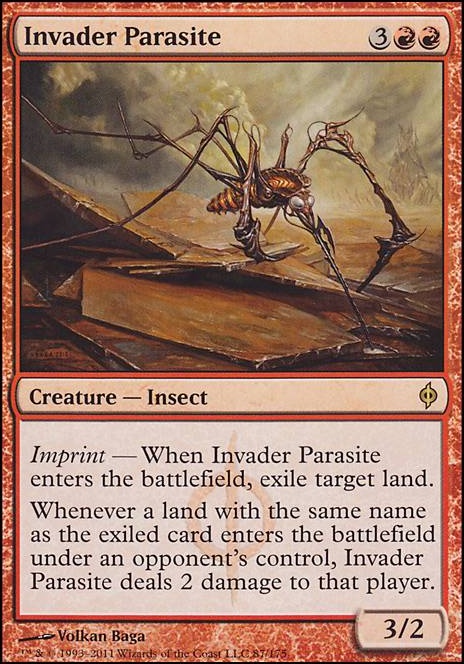 Love the deck! Have you considered Invader Parasite over Ogre Arsonist ? I like the exile as my meta has several Muldrotha, Windgrace, and Gitrog decks running around, and the damage is occasionally useful. Irreverent Revelers , Cavalier of Flame , Flametongue Kavu , and Bogardan Hellkite might be up your alley as well!

Akoum Hellkite, Aria of Flame, Ash Zealot, Bomb Squad, Flameblade Angel (each time your dealt damage by any source with your commander on the ground, it deals 3 damage to that sources commander), Goblin Sharpshooter, Hellrider (same deal as Flameblade but attacking), Invader Parasite, Karplusan Minotaur, Leyline of Lightning, Mindsparker, Purphoros, God of the Forge, Repercussion (works even better since you control the source of damage), Satyr Firedancer (try it with damage based field wipes and you might just clear the table), Stalking Vengeance, Tephraderm, Mondronen Shaman Â Flip, Tunnel Ignus, Warstorm Surge

I'd recommend a copy of Smothering Tithe ; it's just too good to not run in a Boros deck. I think you could cut Thought-Knot Seer , Invader Parasite , maybe Clone Shell , too.