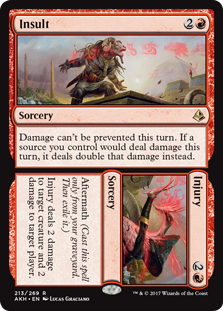 Damage can't be prevented this turn. If a source you control would deal damage this turn, it deals double that damage instead.

Insult occurrence in decks from the last year

You have plenty of mana here and a low-enough curve not to worry about needing the 2 CMC for the (bad) condition of TotFG. Go draw some cards!

No seriously, go get more cards! Both of these can ETB tapped, and the upside of Awakening is WAY higher than Dwarven Mine. You'll be happy you're making this swap!

Go get more cards AND damage someone, all in one turn!

Add some more mana to your pool and give yourself more mid and late-game cards!

-1 Burn from Within +1 Runaway Steam-Kin

I just love Steam-Kin in every mono-R deck that wants to cast a whole bunch of instants. Have fun with more explosive turns!

PhotogenicParasympathetic on What was your favorite play â¦

The Simic player popped off, spitting out loads of creatures with loads of +1/+1 counters, and swung out at me. I took 38 square on the jaw, dropped to 2. All I had in play was a Repercussion and a Glorybringer.

And that's how I killed someone from 40 with Glorybringer's attack trigger, while also 16'ing another player with the Glorybringer itself.

Let's just say my commander, Neheb, the Eternal, lived up to his flavor text.

I suggest, if you want a cheap and quick way to finish off players, try Insult. That double uninterruptible damage + burn afterward is a great addition.

How to Train Your Dragon

Dictate of the Twin Gods is Insult and its other side injury is pretty good too. But the important thing is that it is only your sources.

Yes, Insult will double all the damage from a creature with trample. However damage must be assigned from the unmodified amount first, and then doubled when dealt.

Let's say you're attacking with a 4/4 with trample, and you cast Insult during your first main phase.

From the Gatherer rulings: