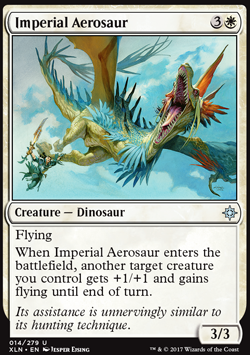 When Imperial Aerosaur enters the battlefield, another target creature you control gets +1/+1 and gains flying until end of turn.

Deck building is about establishing a core for consistency. A core of cards that you always want to draw in games. These cards are the best cards for your strategy. The core cards are played in the deck as 4 ofs (4x of the card). Currently you have zero 4 ofs this will hurt being able to consistency draw certain cards.

Here's an example of a possible core using the cards you have here:

I've made two different two drops (cards with a mana cost of two) as 4 ofs I've done this because you want to consistently draw one of them to play turn two. Monstrosaur is the best Dino here for your strategy it can win you games you want to draw one every game.

Strike and Shock are the best removal spells because they can target a creature or a player. The strategy here is doing damage to your opponent with Dinos. Strike or Shock can give you that last bit damage you need to do to kill your opponent and win the game. I consider these burn spells core cards because they're cheap mana costs once you get a Dino into play you can use these spells to clear the way for your Dino to attack for very little mana cost.

Because they can hit a player they're also not dead cards at anytime of the game because if you have to just use them to damage a player.

If choosing to add Huntmaster this is what the core could change into:

Adding Huntmaster as a core card gives you another two drop that's more important than Terror thus I have reduced Terror to a 3 of instead of a 4 of. The thought is that you want to draw either Huntmaster or Relentless and play them turn two before you play a Terror. Terror is less good then the other two.

Cards that are not in the core are not played as 4 ofs, but as 3 ofs, 2 ofs or 1 ofs. These cards are meant to support the core of cards. Here's an example seeing both using cards you have here and Huntmaster:

I haven't included all the cards currently here this is because these are the best cards of the current cards in the deck. The others that are not in this list I don't think are they're good enough and can be cut for other options.

Regisaur Alpha is a powerful card one of the best Dinos, but he doesn't fit with the deck because he costs green mana. Because of the budget here and not having many dual lands consider cutting green and just playing white and red?

Aether Hub is great mana fixing, but only when you're making additional energy from other sources. Playing Hub as the only green source of mana in the manabase is not worth disrupting all the other cards in the deck.

Cards like Relentless Raptor and Sky Terror have challenging mana costs if playing three colors. These two drop Dinos are more important than Alpha for the strategy here. Huntmaster can give Dinos haste to make up for the loss of Alpha.

I suggest consider cutting Hub and replacing it 4x Stone Quarry. This white and red dual land does ETB (enter the battlefield) tapped, but it has no restrictions of making colored mana. If you can get 2x more Vantage then great it's the best dual land for this deck.

Sunwing is a very good Dino his ability lets you attack with other Dinos and get through with more damage because creatures your opponent plays ETB tapped meaning opponent's creatures can't block your creatures the turn they're played. Sunwing also gives the deck a three drop Dino which I think is important to have at least one three drop Dino. You have Hammerskull in the sideboard which is good, but I think if you don't have any Sunwing then move it to the main deck. It's ability is also good and it's just what you want when attacking with Dinos.

Of the budget option four drop Dinos Aerosaur is a good one because it has flying and can pump another Dino as well as give it flying when it ETB. As a four drop Dino it's ability is better for the strategy here then Needletooth Raptor who's not going to be attacking.

Consider cutting these cards to add more copies of the better cards in the deck? For example cut 3x Hatchling for 2x more Monstrosaur and 1x more Relentless. Another example cut 2x Needletooth for 2x Aerosaur or 3x Rest for 3x Sunwing or Hammerskull, etc.

Here's an example combining some of my suggestions of a possible Dino base to consider:

If this advice was helpful to you I can continue with other suggestions and more advice. Let me know.

I thought about something like this list but kept for evasion from Territorial Hammerskull and Imperial Aerosaur. I also find pings useful for either removal or triggering enrage (something I get to do less than I expected since games end fast).

Thanks for the suggestions. I have this deck paired up against my mono-black standard deck so the deathtouch/removal was killing me and i dont think Trial of Solidarity helps much. I took out the Seraph of the Suns as well as the Victory's Herald for Serra Angel and Queen's Commission respectively. That should lower my mana curve and also help get more tokens out for Oketra the True. I also like Imperial Aerosaur and Emissary of Sunrise instead of the Rhet-Crop Spearmaster.

Thanks for the suggestions! White is in because i wanted to build a deck that contained both Huatli, Warrior Poet and Gishath, Sun's Avatar. I considered Charging Monstrosaur,maybe i'll swap it for the Imperial Aerosaur

4 Sky Terror 4 Nest Robber and then cut Thrash of Raptors and Imperial Aerosaur as far as enchantment hate is concerned, 4 Forsake the Worldly is fine to run in the mainboard since it basically says pay 2 draw a card. I would cut Demolish completely.

I have some ideas for this deck.

You can use Savage Stomp to your advantage with enrage dinos. if you dont have/want many of those in your deck, consider cutting Raging Swordtooth . on that note, Raptor Companion and Tilonalli's Skinshifter both die to Swordtooth's ETB effect.

I would do 4 total of Drover of the Mighty . its a 2-drop 3/3 with an upside. you'll most likely have a dino out, but if not, its still a mana dork to ramp out the big guns.

Thaumatic Compass and New Horizons seem slow for an aggro deck. have you been having success with those, specifically? i'd say probably cut them for a combination of Drover of the Mighty and other dinos. maybe some main deck Lightning Strike or Cast Out for a bit of general removal that doesnt require a creature.

Lastly, have you considered Burning Sun's Avatar (had pretty good success with that guy), Ripjaw raptor (price tag sucks, but the dude is good), Kinjalli's Sunwing , or Imperial Aerosaur (a well-timed, surprise flying dino bomb can close a game)?? if you're going low-to the ground aggressive some other worthy considerations are Sky Terror, Nest Robber, Metallic Mimic, Raptor Hatchling , Territorial Hammerskull, Rampaging Ferocidon, Bonded Horncrest (not in love with him, but not terrible with low curve aggro), Thrash of Raptors, and Dinosaur Stampede. i was rocking a RW dino aggro list and got top 8 at FNM at my LGS. changed the list so much and went Naya, so the relevance isnt there as much. worth noting that low-curve aggro dinos are actually playable. Nest Robber was mvp.