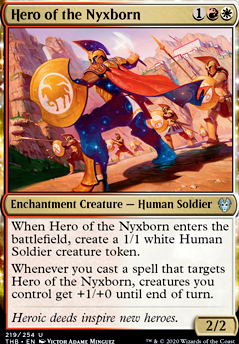 When Hero of the Nyxborn enters the battlefield, create a 1/1 white Human Soldier creature token.

Whenever you cast a spell that targets Hero of they Nyxborn, creatures you control get +1/+0 until end of turn. 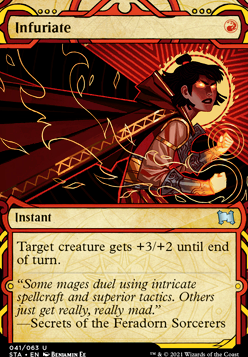 Feather Goes to Theros
by Ziusdra 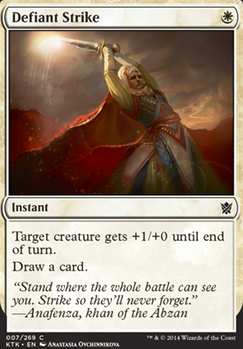 Hero of the Nyxborn Discussion

I am thinking about swapping Hero of the Nyxborn for a Leonin Lightscribe . Furycalm Snarl or Hall of Oracles could also be included? I am thinking if Sudden Breakthrough and Beaming Defiance could be useful?

Thanks Control_Train! This guide and continued updates is great. Do you have any idea what you might cut for Hero of the Nyxborn. To fit Underworld Breach in cutting Past in Flames seems like the logical choice, but having two of those effects might be nice.

-6 You get an emblem with, "Creature tokens you control have +1/+1, haste, double strike, and trample."

Drawback: It's a token-centric planeswalker. You can only put the +1/+1 counter on a token. But it does allow you to spew out a few tokens, in case you're not making them otherwise. Synergize it with things like Elspeth, Sun's Nemesis, Hero of the Nyxborn, Omen of the Sun, and Satyr's Cunning. And of course, the new Anax uncommon legend. Plus, the fact that it costs 2 is clutch for the hasty kill this kind of deck is wanting to go for.

Make a card, like I did, that makes a standard deck that wasn't previously viable suddenly come into existence. All the other peices are there--but it's your card that either brings it up to the speed at which it needs to operate, or gives it the punch it needs to close the game.

At the beginning of combat on your turn, if you control a creature with power 5 or greater, exile the top card of your library. You may play that card until the end of the turn.

Whenever you cast an instant or sorcery that targets a creature you control, choose one:

We've seen cards with more text, though this one is certainly pushing the limit. I like it. It might seem a little overpowered because of its sheer number of options and (mostly offensive) flexibility, but the options all cost fixed mana, which I think really balance it out (and actually might make it a bit frustrating to play if you don't run a ton of dual lands). This would be fun to put in a deck with Feather, the Redeemed, Dreadhorde Arcanist, Gnarlback Rhino, Season of Growth, those new heroes in Theros (like Hero of the Nyxborn) etc. This makes it good for Commander for a particular type of Commander deck that doesn't have a general to rally around, while making it somewhat unreliable for Standard.