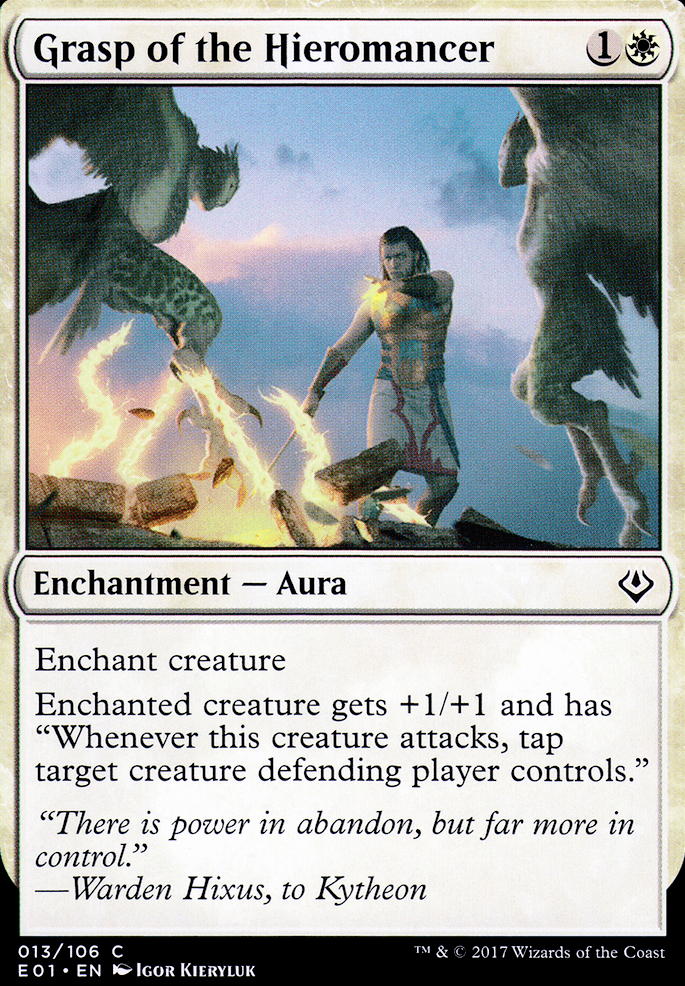 Enchanted creature gets +1/+1 and has "Whenever this creature attacks, tap target creature defending player controls."

Aura of Justice
by IcyLightning 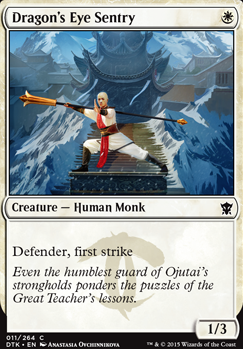 Grasp of the Hieromancer Discussion

imoutogetyou thank you for your advice, while I understand why you suggested Selfless Spirit I think Gideon has more of a connection to Bant over Innistrad seeing as it was the first place he planeswalked too when his spark ignited and also where he changed his name from Kytheon Iora to Gideon Jura, that is the big reason why I went for a card like Knight-Captain, but the fact that when he ETB's he creates two blockers/attackers is also a nice upside. So while I thank you for your help I feel, flavour wise at least, that Knight-Captain of Eos is better suited to this deck over Selfless Spirit

As for Ravenrose I'm very sorry I can't believe I never replied to your advice! Thank you for approving the flavour aspects of this deck as it was a major focus of this decks creation for me! I just want to let you know that Gideon's Sacrifice was immediately added to the deck when I pulled one at the Pre Release and I'm currently trying to find a slot for Grasp of the Hieromancer as it fits in well with cards like Gideon's Avenger , as for God-Eternal Oketra I think for now at least I'll be leaving her out of the deck, purely for flavour reasons, now she's been killed and reanimated she isn't the god that Gideon trusted dearly on Amonkhet anymore, she goes against all her beliefs from when she was alive and that contradicts the theme of this deck, not to mention in her artwork she's aiming an arrow at Gideon and his Trusted Pegasus , although once again I think you for your help with one of my decks.

How about a Planeswalker who switches out of their color ;)

Also, I kind of find it funny that Gideon is poorly represented in his cards. Gideon's type of magic is Hieromancy, which is essentially law magic. He can make things impossible to destroy (Which is why he always becomes indestructible), but also bind opposing forces. Those lashes he uses are made of light, and so are the chains on Grasp of the Hieromancer. Gideon does rally forces in lore, but on cards he is actually better suited to tap down and restrict. Ajani / Elspeth are more aligned with recruiting / joining forces together.

+2 Detain until your next turn up to two creatures you don't control with combined mana cost equal to or less than 5.

0 Until end of turn, Gideon Jura becomes a 6/6 Human Soldier creature that's still a planeswalker. Prevent all damage that would be dealt to him this turn.

If another Planeswalker you control would be destroyed or if your life total would be reduced to a quarter of your starting life total, transform Gideon, Test of Patience and return it to the battlefield.

Gideon, Lost in Rage is red.

-10 Destroy all non-land permanents target opponent controls. Their life total is reduced to a quarter of their starting life total.

So if you bring him out and you lose another Planeswalker through damage / removal, you transform Gideon. Same thing if you take too much damage.

However, you could actually just bring him out late-game and use his -3 immediately if you see fit.

Build him up for the long-term play, or play him fast for the aggressive in-your-face style red loves.

I'm way too stressed out right now to think of a card so it's your call. Wild card. Sorry guys.

moldycrow83 - Thanks for the compliment to the deck! I've taken a look through your suggestions and picked two which I thought would be useful additions: Grasp of the Hieromancer and Fountain Watch. These I think add something to the deck that it previously had none of, and that is tap-down control and artifact/enchantment protection. While it's true I was considering Sterling Grove to begin with, I decided against it for play group balance reasons, but I previously had no idea about Fountain Watch - I think it being a creature will be much easier to work in with the people I play with regularly. As for Grasp, I like your idea of being able to passively eliminate potential big blockers without having to resort to point destruction. As for the additions in other categories I passed up, I think so far I'm set on what I want for the current power level of the deck; I decided to forego the Exploration in favor of the somewhat slower Kodama's Reach and Explosive Vegetation, I like my current suite of board wipes and removal that isn't so responsive that no one can pull anything over me, and in terms of evasion/trample effects, I like where I'm at right now with the number of enchantments I have that do similar things like Rancor, Angelic Destiny, and Pollenbright Wings. This being said, pretty much all of your suggestions I can see as being totally viable in this deck, so your calls are good.

Anyway, thanks again for the recommendations! I'm glad you found the deck satisfying for the most part.

Ladies and Gentleman: Before you is a fine example of why the "Troll" creature type gets Regenerate.
(Hrm, there's an idea. There are 27 Trolls in the game, only two of which don't have Regenerate. I might be able to do something with that!)

Once again, you're looking at things from an extremely narrow and ultimately blind point of view. Auramancer is Common to encourage the use of Auras, as it is a readily available tool. Printing it at a higher rarity would deter players from using it.

Auramancers was last printed in a full set in Magic Origins, which had 12 Auras in it. Four of which were white - Grasp of the Hieromancer, Knightly Valor, Murder Investigation, and Suppression Bonds. Of those, Auramancer synergizes best with Murder Investigation due to the requirement of a dead creature, and with Suppression Bonds to help re-lock a creature after the card is removed.

Oh, and I'll let other people express their disappointment in your opinion of Commander. They can do that so much better than I, as I don't particularly care for it either, but I'm not going to demean it for that. It's a part of the game, and I have to accept it for that.

Hey aekrusty, thanks of the upvote at my Leovold Commander Elves deck. You asked for my review of your deck. It looks great, really good job constructing it. +1

I'm not going to give you a review per say, but instead some suggestions for you to consider. It appears you are going for a more budget deck as evident by the lands your using in the manabase. Because of this my suggestions will be budget, nothing over $10.

Some more low CMC auras that can help Giest:

You're already using Steel of the Godhead which is great, but I think you need to take better advantage of being able to slap auras on Giest making him an even more scary threat.

Some more creatures who can protect Giest:

Other than Dig Through Time and Fact or Fiction your deck lacks draw. Sphinx's Revelation is one of the best control draw spells.

Azorius Charm is an excellent control card and great with Giest.

Everytime Giest is killed he costs more to cast him from your Commander Zone. Both Medallions can help with this cost as well as reduce the cost of all the other cards in your deck.

Are you having problems with your current manabase? Using 14x of each Islands and Plains seems like a lot, potentially preventing you from having both colors when you need them. Consider adding more low price Azorius dual lands and budget fetches, Wilds and Expanse:

Out of all my suggestions these are the better ones for you to consider:


Good luck with your deck. Great job, getting #1 on TappedOut!