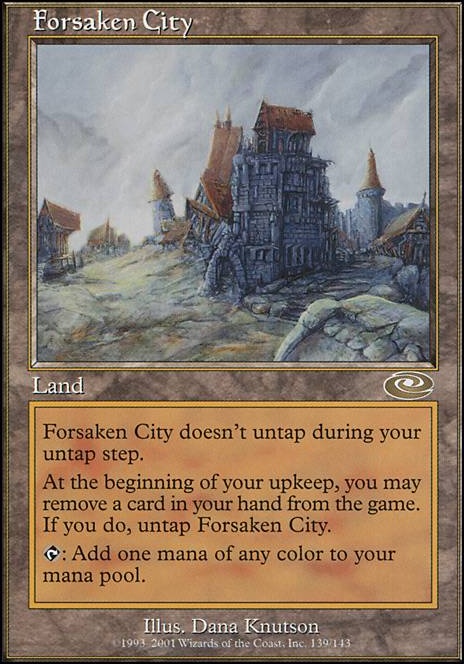 At the beginning of your upkeep, you may remove a card in your hand from the game. If you do, untap Forsaken City. 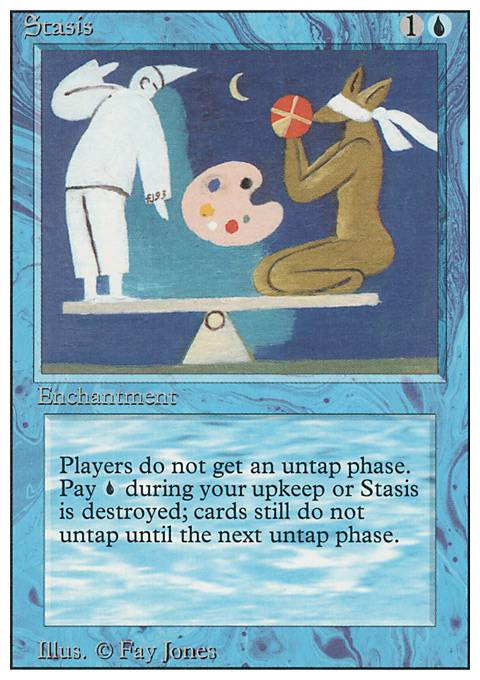 smackjack on owling mine help

Howling Mine+ Stasis + Forsaken City. Use Stasis to lock everyone down and draw extra cards with Howling Mine to pitch to Forsaken City to be able to pay Stasis upkeep cost every upkeep. Fun times

Ok hkhssweiss, where to begin!

No need for Forsaken City , doesn't help with this version of Stasis because I don't have a turn,

Everything except Mindbreak Trap has been tried and taken out. Much of it is too slow, again no need for things like Trickbind to counter the Stasis trigger, and there's not a lot of things I would spend 2 mana on to counter, I have counterspells for scary stuff.

Mindbreak Trap could be a decent answer to counter wars, and Storm. I'll slot it in somewhere.

Unfortunately I can't upvote anymore than I already have but have you considered running cards like:

These are some cards to consider for running Stasis lock. I would highly recommend Forsaken City as you can literally tap out and continue to pay for Stasis. Teferi also helps with this strategy as it untaps your permanents while Stasis lock is enabled. Snapcaster is there for redundancy spells to reuse. Overburden is great since you are playing creature light and really hates on creature heavy decks. JTMS is good for the manipulation as well as card advantage, not to mention to bounce the abundance of effects and can be another line to win the game as well.

The other assort spells can also be great as you want good cheap efficient spells or free cast spells. You can also consider Arcane Laboratory as well to stall the game longer and keep a lock on the board.

Hi , @pato_mtg . Thank you for your Question!

So the reason I do not run Crop Rotation right now is that I don't feel it is truly 100 % necessary as a must have mainboard card just for its one-time use... When used Solely for explosiveness that ultimately could still get you nowhere while it doesn't advance our lock in any way nor does it provide us with a turn 2 Derevi just seems Redundant to me... It Could also end up being a very very dead draw at some points in the game for just a "single-use-1-land-fetch" compared to Weathered Wayfarer in our longer grindy games which this deck aims for anyway or after the occasional Mass land destruction occurs ( Ravages of War ) :'( ...

But then again I've had success with it as well before by gaining quick access to Gaea's Cradle with some dudes out and a Yisan, the Wanderer Bard in play or finding me Forsaken City to fuel my Stasis -Lock... While it can also give you card draw trough Horizon Canopy or soft counter a Wasteland / Strip Mine type effect finding you a replacement... I mean there is nothing wrong with running it and sure has some uses... It's an excellent card to be sure. but my Problem with it has always been the sheer disadvantage of losing card + Land Advantage and the possibility to have it be countered instead. losing all your tempo for just explosiveness is not my playstyle as I'd rather look at plays to keep my opponents from winning at all!

I am pretty aware of most Combo creatures and threats for us that are hard to deal with. But just one effect like this doesn't feel right and Chances (%) are so slim of you having this at your disposal and it being castable as well... I do run effective removal that is also a little more grindy in the form of Ulvenwald Tracker ... I've become a huge fan of this card as you can force Derevi or other creatures heck even Dorks to smash into a Hermit Druid for example... Most of these combo creatures are very low toughness. Or the ability to keep removing Dorks and such is also very effective.

As a creature heavy deck, most combo decks won't get through to you that easily by aggro either or go for aggro at all anyway as that is mostly not their go to win condition... I mean we can eat Tymna the Weaver or Najeela, the Blade-Blossom all day unless you're facing a lot of reanimator or Toolbox threats like Yisan that you need to deal with at instant speed... Yeah, then I'd side it in too!

If you could actually share or talk about the number of times this saved you from specific things that would definitely be interesting to take in consideration for other people looking for flex slots, or talk about the cards that force you to run this?!

With a deck so packed with hate towards artifacts and enchantments, I feel this only really becomes truly necessary over something like Aura Shards if an opponent managed to slip through your Stax and resolve a crucial combo piece which surely happens from time to time... Especially after the Aetherflux Reservoir and Paradox Engine / Iso-reversal prints... It could fit in the deck instead of Aura Shards easily. The Only reason I haven't had to do so yet is because of grindy cards that allow me to take piece by piece...

Sure I've died to Aetherflux Reservoir while having Stony Silence + Null Rod in play and losing both with a bunch of other Stax in play... But I mean Nature's Claim would then still need to be just that right card at that right moment with such a low chance (%) being the card you draw or get access to every game for just its single use...

Hope that was of help and explained my thought process behind not running them in the current iteration for the time being. (Subject to Change according to meta or personal needs anyway and all of them are in my Sideboard explanation in the Primer!)

(Ya win some ya lose some :'( , But consistently wise I prefer the Grindy setup that aims to remain effective over the one time uses.)

With the New Tests/Retests/Sideboard-Swaps/additions, I can already safely say that Priest of Titania is going to be replaced by Lavinia, Azorius Renegade as soon as I get my hands on one!...

(Playmat + boosters (price support) = I gave them to the "newer" players! Not because I care but because I came for First Place or to learn more of my mistakes as to why I didn't get there and how to improve myself!!!.)

Present commanders on my tables;

(Copperhorn Scout Stasis lock is what got me too far ahead even after scout got removed I was able to keep it alive for so long!)

(Made everyone draw due to 2 oppressive locks with humility and specific storm hate, but reminder!!! ---> our pod consisted of all the players that won their last pods so it resulted in everyone getting dragged down a bit in score! everyone becomes simultaneously second... Too Many Resets and Rebuilds + slow play storm player!)

(Managed to live a lot longer thanks to the other Hokori while a blood moon was out and got ignored for a short while! Discard deck had a "the rack" kind of playstyle and hurt the other players a lot as well... ended up 1v1 with Derevi and we all know how broken that is if left unchecked!)

Every Single card that was added recently saw play or got in my hand at some point and regarding most useless (even though explosive rarely) titania is redundant to what this deck tries to do, in this meta many two drops needing to be Stax is far more important and more likely to not lose you games!

Forsaken City + Stasis : It is so easy to set up... (Idea was taken from the Black vise vintage deck)

Hi, so it seems Sigi is "swamped" with work and not really focused on Cedh anymore that he is unable to give me a proper argument or even respond as a proper "Cedh player" should. (Also blocked me pretty = childish and low I'd say xD) So why an exact copy with absolutely no proof of it being even remotely better and keeping in mind that Stax can be meta dependant (So not running an autistic caterpiller is not going to make a deck more or less Cedh suitable and I'd argue it is a shit card but w/e) also it was added a year later than the list I made...

Wauw so much difference, such insane, very wauw... Change my mind why the copy is better and these cards make it the only version you show? also, sigi can't count very well ;)

Any thoughts on using Forsaken City as an easy way to maintain the stasis lock?