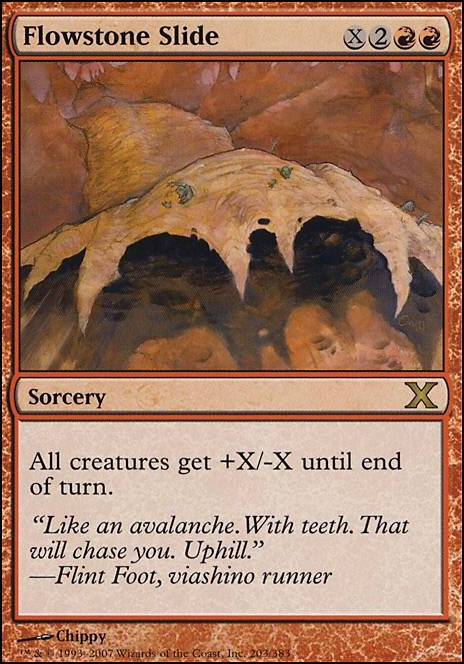 All creatures get +X/-X until end of turn.

12 is rookie numbers. We need 15 Chandra's at least. On a more serious note have you considered Subterranean Tremors instead of Flowstone Slide?

I have been slowing building a Kresh Deck myself and have a few suggestions for you to consider.

Rite of the Raging Storm - High mana cost, but a potentially 5 counters every end step.
Ulvenwald Tracker - Single target removal / Kresh wins fights...
Flowstone Slide - Spicy / underrated / lesser known card. How many extra counters would you like? Also consider Flowstone Surge against/with token strategies
Reyhan, Last of the Abzan - Because your creatures will die or put into the command zone ...
Traverse the Outlands - Ramp based on creature's power ...
Rishkar's Expertise - Draw based on creature's power ...

Spudding, Thanks for the suggestions!

I have made a couple changes to the deck. I definitely plan to add Pathbreaker Ibex as soon as I can, that card is perfect for this deck!

I will have to stick with Dictate of Karametra for now due to cost and I don't mind the slight hug to stay on people's good side as long as possible.

Also, with Mind Slash, the group I play with has a good amount of control and pillow so I like being able to get a counter spell out of their hand before casting say Flowstone Slide or another Sorcery they would likely counter. I'm sure there are better choices for that but it's all I have at the moment.