Whenever a nontoken creature you control dies (is put into the graveyard from the battlefield), if it had counters on it, create X tapped 2/1 white and black Inkling creature tokens with flying, where X is the number of counters it had on it.

Learning to Counter.
by Yashakami 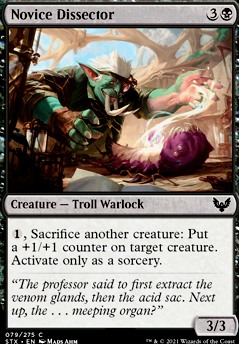 A world of Ink
by KumaBozu

Felisa, Fang of Silverquill
by Kartoffelkrieger 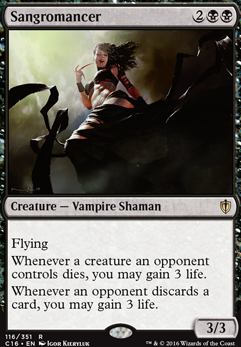 Massacar on Advertise your COMMANDER deck!

This is the quietest I've ever seen this thread, so here goes nothing. FellInAWill comments inbound.

So this deck is in need of the last few cuts still, so any suggestions there will be greatly appreciated.

It's centered around Felisa, Fang of Silverquill

, and it's primary function is to generate a lot of counters, to make lots of tokens, while gaining life.

Felisa isn't messing around, and seems like she has some great power potential here.

I really appreciate your thoughts. I think Felisa, Fang of Silverquill

is a good choice with Athreos, God of Passage and Mikaeus, the Unhallowed , It'll make a great number of creatures.

I'm also using in my list a Michiko Konda, Truth Seeker to force the opponents to attack each other while my creatures got some coutners.

And how about a Embrose, Dean of Shadow for counter generator, draw and even a removal agains weak creatures?

Rodrigoks hi! Thanks for stopping by! Political Breena is also very fun, I can highly recommend it -- the precon looks like a great time. I just really, really like building aggro-ish decks in EDH for some reason. And decks that maximize cheap draw-cards Commanders. (Like Jori En, Vega, Cutthroat Sygg)

As for the precon, my personal build is insanely low-to-the-ground, and very bent on putting on pressure above defending yourself. The best defense is killing your opponents, after all! I LOVE Keen Duelist, though, and she got immediately slammed into the deck as soon as I saw her. Glyphweaver, too, is super useful, as getting a critical mass of creatures is very important to make Breena hum, and having anti-wipe protections on bodies is super useful.

On that thread, I'm curious about Felisa, Fang of Silverquill

, but I'm just not sure. I'll have to do some testing. She seems quite powerful, and the deck does generate a lot of counters, but I'm not sure I want the four-mana evasive threat. My four-drop slot is, after all, two pieces of mana denial, Linvala, and Ashling, both of whom are chonky, disruptive threats. Hm.

For wipe protection in general, I think Promise of Tomorrow is pretty good. In a wipe-heavy meta you'll want it, but I don't think I quite have space in this specific build. If the deck tries to slow down, it's super powerful, though, so I'll keep an eye on it.

That's a great list, really nice idea. I was trying to build a more political Breena but your list changed my mind. An aggro Breena is really powerfull.

And how about the new cards that come in precon? Nils, Discipline Enforcer and how Cunning Rhetoric could help protecting against attacks?

can really help against a board wipe. And what about Keen Duelist in the deck? A risky drawing card?

Selfless Glyphweaver Â Flip could be a good one for protection.

Also, what do you think of using Promise of Tomorrow in this deck?

Really appreciate your idea and I'll try build a Breena with your idea!