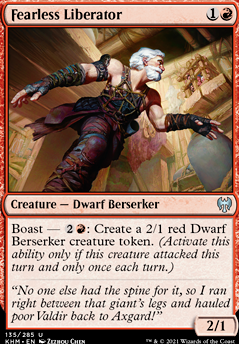 Boast â : Create a 2/1 red Dwarf Berserker creature token. (Activate this ability only if this creature attacked this turn and only once each turn.)

Magda and the Seven Dwarfs
by Kelticblade

Swords and Plowshares
by Minousmancer 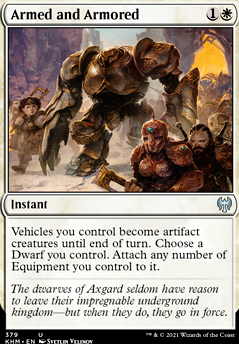 Short Queens and Lizardmen
by mrsaggy

Hello! Thank you for your advice on my budget deck. I had a few ideas that might work to help with yours as well.

I might swap out Arcane Signet for Everflowing Chalice . While Chalice doesn't get you red mana, it is a variable cost-efficient mana rock. You can burn down extra treasures to boost Chalice's multikicker to get enduring mana at a 1 for 2 ratio.

For boosting your dwarf tribal and getting more dwarves out, Brass Herald might be useful, I don't see it being as strong as Coat of Arms, but in the right situation it might compete with Obelisk of Urd.

I could also see Fearless Liberator being more useful than some of the dwarves you have already. Rimrock Knight also gets you some extra utility on a 3/1 dwarf which could be useful. Vault Robber seems ideal for Magda, as when she is out you can get two treasures on a single tap.

For draw, I think both Conqueror's Galleon Â Flip and Trading Post could be quite useful. Conqueror's foothold can start out as a great blocker and dwarf tapper, and can transform into ramp, looting, card draw and card return. Trading Post can get you life, blockers, draw and return artifact cards, I could see it comboing particularly well with Spine and Meteor Golem.

Lastly... I don't think this is necessarily a good board wipe, but a fun one in combination with Magda and might work pretty good with your giant dwarves would be Brawl . If nothing else you get some treasures while everyone blows up each others creatures.